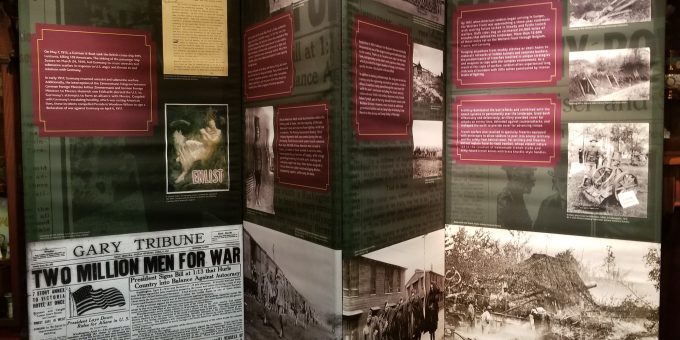 The exhibit, which showcases Indiana’s contributions to the war effort and the war’s long-lasting effects, will be on display at the Orleans Public Library. The free exhibit may be viewed anytime during the library’s regular hours of operation.

Indiana’s contributions during the First World War went far beyond the men and women who were drafted or volunteered for overseas duty. Tens of thousands left home for European battlefields, hospitals, and training camps, and several thousand never returned. The scale of the war and the vast amount of mobilized resources unavoidably drew Hoosiers statewide into the war effort with long-lasting effects.

The exhibit explores the roots of World War I, America’s entrance into the war, Indiana’s participation in and contributions to the war effort, the evolution of warfare, the role of Hoosier women both at home and abroad, Germans in Indiana, efforts for lasting peace, the construction of the American Legion building and the Indiana War Memorial, and more.

OCHS President Robert Henderson says exhibit explores the impact the war-time demand for steel, machinery, and equipment had on Indiana’s towns and cities such as Indianapolis, South Bend, and Gary.

“The Great War: From Ration Lines to the Front Lines” is made possible by Kroger.

About the Indiana Historical Society

Since 1830, the Indiana Historical Society has been Indiana’s Storyteller™, connecting people to the past by collecting, preserving and sharing the state’s history. A private, nonprofit membership organization, IHS maintains the nation’s premier research library and archives on the history of Indiana and the Old Northwest and presents a unique set of visitor experiences called the Indiana Experience. IHS also provides support and assistance to local museums and historical groups; publishes books and periodicals; sponsors teacher workshops; produces and hosts art exhibitions, museum theater and outside performance groups; and provides youth, adult and family programs. IHS is a Smithsonian Affiliate and a member of the International Coalition of Sites of Conscience.