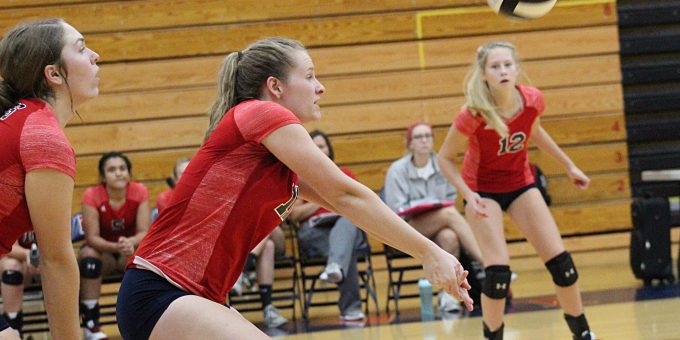 (BEDFORD) – For the opening moments, enough to make the No.2 team in Class A squirm, Bedford North Lawrence was playing high-level, eye-opening volleyball. And then Trinity Lutheran opened its eyes, saw the situation, and took control.

The runs – 15 of the last 17 points in the first set, a 6-0 burst to erase another brief deficit in the third – were the difference. BNL doesn’t have the firepower to sustain streaks, nor the ability to give away points and bounce back with so little margin for error.

Jaynes, a 6-foot-3 thunder maker at the net, had 7 kills and 5 blocks as Trinity Lutheran improved to 12-4. Kennedy Hoffman added 8 kills as the Cougars made up for the absence of senior middle hitter Hannah Sabotin (destined for the University of Indianapolis).

“They had some big kids that were hard to get around,” BNL coach Jordan Robbins said. “She just sticks her hands up there. And they could swing hard.

“The biggest thing was we didn’t get going. That’s been an issue we’ve had. We didn’t have the best warm-up, and here we go rolling into a match and we weren’t ready. We get going, but it’s too late.”

Trinity Lutheran got it going after a first-set timeout to refocus.

“Our ball control was really sloppy,” TL coach Faith Wilder-Newland said. “We weren’t handling serve receive very well, so after that we said to get it together, start communicating and handle the ball. And our servers picked it up a notch.”

BNL had a 12-10 lead in the third set before the Cougars clawed back in front. Bailey Reynolds added 8 digs and 5 aces, Elly Carter totaled 10 digs, and Bailey Tabeling had 6 kills for Trinity.

Annie Waggoner paced BNL with 16 assists and 5 digs while going 9 of 10 at the service line. Haley Deckard was 8 of 8 serving with 5 digs and 4 kills, Autumn Hall also added 5 digs and 4 kills, and Carlee Kern was a catalyst with 8 kills and 14 digs.

BNL was without the services of Merritt Callahan (concussion) and Myla Bergman (in Texas to watch her brother graduate from Air Force basic training).

The Stars (1-12) will host the BNL Invitational on Saturday, with action starting at 9 a.m.