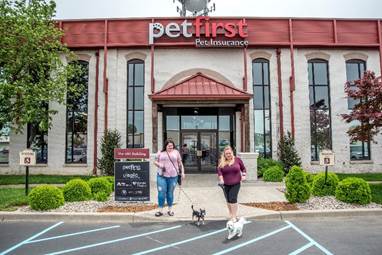 Moore, whose dog Puddin is known as the “First Lady” of Jeffersonville and has her own Twitter account, visited the PetFirst offices to help celebrate the company’s 15 years in business. That’s 105 in dog years. (You can follow Puddin at @FirstLadyPuddin on Twitter.)

“Not only is PetFirst a pet-friendly workplace, but they also are working to make life better for pets across the country,” said Moore. “When you couple that with Jeffersonville’s excellent dog park, its warm embrace of First Lady Puddin and its excellent walking paths, you can see that we’re clearly the most pet-friendly city in Indiana.”

PetFirst employees – who also had their pets on hand for the celebration – marked the anniversary by packaging 15,000 treats to be shared with shelter dogs in 15 cities. The treats will be mailed to shelters in the region and around the nation.

“Our company has always been about the welfare of pets,” said CEO Katie Blakeley. “We were founded 15 years ago with a simple goal: We wanted families to be able to make the best medical choices they could for their pets, without worrying about the cost. So it’s only fitting that we celebrate our anniversary by bringing some treats to dogs as they wait for their new homes.”

With more than 60 employees, PetFirst Pet Insurance is a fast-growing company that is based in Jeffersonville but serves families across the nation.  The concept of pet insurance is new to many Americans, though it is more widely used in the United Kingdom. The industry is growing rapidly in the U.S. though, having recently exceeded $1.4 billion dollars in size, and growing by double-digit percentages most years.

The proclamation prompted some Southern Indiana rivalry. John Gilkey, representing the town council of Clarksville, proclaimed Clarksville the most pet-friendly town in the state. The PetFirst headquarters sits on the boundary of the town of Clarksville and city of Jeffersonville.