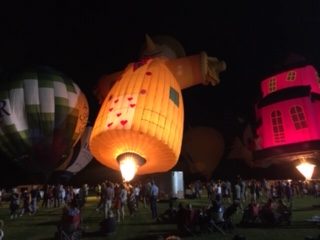 “This event supports a variety of projects that the Kiwanis organization supports Riley Hospital, Boys & Girls Club of Monroe County, and eliminating neonatal tetanus just to name a few of the things our local organization supports on a state, local and national level,” said Vanessa Mclary event coordinator of the event.

There were more than ten hot air balloons in the night glow on Friday evening. Some of the balloons included Tweety Bird, Sylvester, Haunted Mansion, Scary Crow, and the Wizard of Oz.

There was a Kiwanis Idol Contest, and the Endless Summer Band from Indianapolis provided music on Friday evening. The event raised more than $30,000 for charities that help children in Monroe County, in addition to other community projects.

The Indiana Historical Society Auto Indiana was at this year’s event. This is the third season for the traveling museum, according to Mark McNeese. There is also a museum in downtown Indianapolis for the public to learn about the history of Indiana cars.

The traveling museum can be booked for public events for $2,500 for a one to three-day festival. The public can enter the museum for free.

At the beginning of the museum, visitors will find Indiana’s Torch made out of vehicle parts, and license plates in the color yellow, just like the State’s Torch on Indiana’s flag.

By touching the 1914 Marmon touch screen you will hear the sights and sounds of what that vehicle sounded like in yesteryears. In the Column Glove Box, you will discover some of the items that you would have found in that era.

A map of Indiana shows some of the 100 different vehicle manufacturers in the State of Indiana. Children can hop in an Indy Race Car and pretend to be a future Indy 500 Champion.

The museum has images of the landscape of the auto industry from the past to what it might look like in the future.

The Endless Summer Band has performed for more than 29 years, in the State of Indiana, across the United States and abroad. Their performance includes music from the 60’s to music hits of today.

Brian Goodwin plays bass guitarist and is the band’s lead vocalist, lead guitarist and Master of Ceremonies is Bryan England, Dave Clawson is on drums, Faith Marie is a vocalist with Nick Lemmo, and Jay Young is on saxophone.

The band usually books more than 140 dates a year in and out of the United States.

Of course, there were a variety of vendors who offered all kinds of goods and services, food, bouncy houses and slides for people of all ages to enjoy.