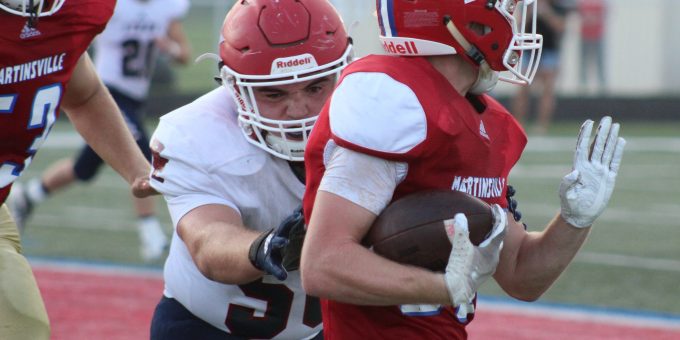 After two draining weeks and disheartening losses, the Stars require a reboot as they prepare for their home opener – finally – and Hoosier Hills Conference debut with Jennings County on Friday night.

Now the goals are simple. First, BNL wants to play a second half without the clock in perpetual motion. Second, the Stars need to score meaningful points. Third, they need a ‘W’ in the worst way. All three could be accomplished with a burst of emotional energy and controlled anger. That should be easily summoned after combined scores of 75-0 in first halves thus far.

“Football is a game of emotion,” Weber said. “I don’t see us playing with emotion right now. We’re not excited out there. You have to play hard to the whistle every snap, and they’ve lost that somewhere.

“Maybe we’re hammering so hard on how to do it, they’re forgotten to just go do it and get to the ball. We have to get back and find the joy of why we’re out there. It’s become work, not fun. We’re searching for answers and answers are hard to find.”

In years past, jumping on Jennings County was a lot of fun. BNL leads the series 39-7, after all. And if the computer power rating is accurate, the Stars are heavily favored. But there are red flags. Don’t dive in that churning water just yet.

The Panthers (1-1) are averaging 35 points per game with a dynamic passing attack. BNL’s defense has been plucked and shucked by outstanding offenses. Does JC measure up to Martinsville and Bloomington North? That will be determined soon enough.

Be aware. JC quarterback Lance Bailey has thrown for 509 yards. Jared Corya, his main target, has caught 18 passes for 228 yards. Owen Deaton had three rushing touchdowns in the opener against Batesville. First-year coach Justin Sharp has a sharp attack, capable of drawing blood.

“They scare me to death,” Weber said. “Their scheme presents some problems. We’ve had to retool and move some kids around, and they’re good. They’re scoring points, and we’re not. It’s going to be tough, and we have to be ready to play.

“The quarterback has got a good arm, throws the ball well. And he’s a big, hard runner. It’s no easy feat. We’ll have to do a lot better. They throw a lot of intermediate routes, and if we can’t cover that, we’re in trouble.”

BNL, despite the brevity and blahness of the two losses, is not floundering in frustration. After the rugged road debuts, the Stars have an opportunity to recover.

“We’d rather not be 0-2, but we’ve played two pretty good teams,” BNL senior quarterback Dalton Nikirk said. “We can get back on schedule pretty quick.

“Just execute. We need to do our job, and we’ll be fine. We learned we weren’t ready, we weren’t physically or mentally prepared. That was a wake-up call.”

BNL’s triple-option offense, so electric and explosive a year ago, has yet to fire. Part of that is the loss of starting center Reagan Bowman late in the preseason. The running game has generated only 168 yards and 3.1 yards per carry.

Conversely, BNL’s defense has surrendered 8 scoring plays of 20-plus yards, and special teams have allowed two touchdowns. And those stats are skewed by the time element. Sharp, a 1999 Jennings grad, is still wary.

“We think very highly of BNL,” said Sharp, a former assistant at Cathedral, Lawrence Central, Southport and Columbus North. “They’ve played two really good football teams, not your average teams at our level. They’re beat up a little bit but they’re dangerous. That’s why we have to watch out. They’re hungry and want to get on the winning side.

“Playing defense is key. Our defense has been our Achilles heel. We’re giving up way too many points. If that continues, BNL is good enough that we can’t outscore them. We need to limit them to small plays. We have to be very disciplined.”

Game notes: Jennings County is ranked 60 out of the 62 teams in Class 4A on the Sagarin computer ratings. Last season was the first time the programs did not play since BNL was formed in 1974. The Panthers have lost 10 straight HHC games. Jennings has enjoyed only one winning season since 1997.