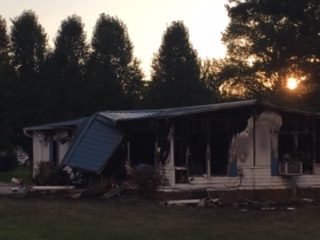 (LOOGOOTEE) – A home in Loogootee was destroyed by fire on Sunday evening.

Firefighters were alerted around 8:30 p.m. that a mobile home was on fire at 1104 West Broadway.

When firefighters arrived they found the home fully involved.

The older double-wide mobile home is owned by Beverly Taylor.

Fire officials say the family escaped without injuries, but the family’s pet perished in the blaze.

Some firefighters suffered some cuts and bruises while fighting the blaze.

Firefighters acted quickly to contain the fire and keep it from spreading to nearby structures.

The fire is believed to be caused by a lightning strike during a thunderstorm.

Firefighters remained on the scene past midnight.

The Taylor’s son, who is currently in the Army, has started a GoFundMe page to help the family. You can go to https://www.gofundme.com/f/taylor-house-fire-relief