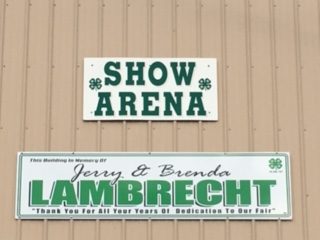 (BEDFORD) – The naming of buildings is something the Lawrence County Fair Board is very reluctant to do. There are so many people who work the fair and contribute to it in so many ways.

The idea of doing something was mentioned not too long after Jerry Lambrecht passed away. Some said emotions were still too fresh. But Jerry and Brenda Lambrecht had been apart of the Lawrence County Fair for over 40 years.

Jerry worked all over the fairgrounds, as he was raised on a dairy farm and was a part of showing dairy cows in addition to serving as fair board president for consecutive years. However, his biggest contribution was to the auctions that are held every year bringing in $110,000 – $125,000 each time.

Jerry and his dad Paul were advocates for creating the exhibition hall that was constructed on the fairgrounds site. The building cost over a half a million dollars to build and this year the fairground staff is only six months away from of having the building paid off. The building has been a great asset for the Lawrence County Fair as well as an asset for the community. Jerry was responsible for getting vendors in during the fair which contributes to the positive financial impact on the fair.

The exhibition hall is rented out at least two to three weekends a month, and is available for birthday parties, weddings, and other events with plenty of space to accommodate any kind of event.

Brenda was a little bit more subdued, not very as open as Jerry, but some say she had Jerry’s ear on things.

According to Bill Spreen, Jerry tried to mentor youth and encourage them into going into the agriculture business. He always noted that you can be successful and make a living being in it.

Bill approached fair board members and other 4-Hers this year about naming the show arena after the Lambrecht’s. He says the idea got a cool reception at first and that they are cautious about doing that kind of thing. But by the next fair board meeting everyone was behind the idea.

Jerry’s and Bill friendship started early on with Jerry being 10 years older than Bill. They started competing in dairy judging. Bill and Jerry won at the state fair and went on to the national competition in Wisconsin. “He really was a mentor to me, offering advice throughout the years; that has paid off for me.”

Participation in 4-H in Lawrence County has been steady. There has been some decrease in the beef area of the fair, but dairy has shown gains. The main reason for this is the costs associated with beef cattle. It also takes a lot of time to prepare for the fair. Usually starting in October, it takes about two to three hours a day of preparation leading all the way up to the fair.

Being part of 4-H has helped many go on to successful careers. And farming still remains a leading industry in Lawrence County.

“When I saw Jerry last, his brothers and sons left the room so we could talk. He took me by the arm and told me do not let the 4-H Fair go down,” said Spreen. The fair continues to teach youth leadership, commitment and social skills to become the leaders of tomorrow.