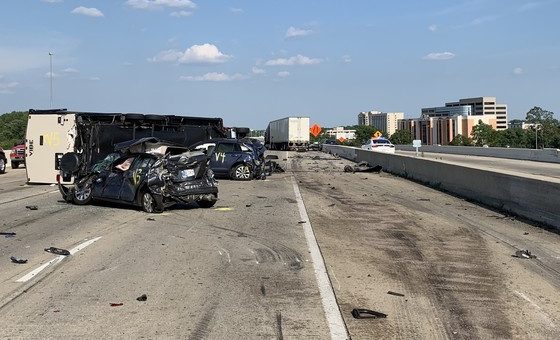 (INDIANAPOLIS) – The three people that were killed in Sunday’s crash have been identified.

29-year-old Alanna Koons and her 18-month-old twins June and Ruby were in the car that burst into flames after it was hit by a semi.

State Police believe the semi, driven by Bruce Pollard, 57, of Sturgeon, Missouri, was going too fast. Pollard was charged with reckless homicide and criminal recklessness.

(INDIANAPOLIS) – Three people, including two toddlers, were killed when a semi truck slammed into the back of their car on I-465, about noon Sunday, in Indianapolis.

State Police believe the truck, driven by Bruce Pollard, 57, of Sturgeon, Missouri, was going too fast.

The truck hit the back of the car in which the people were killed, which then hit the car in front of it, causing a chain reaction crash that injured seven more people, one considered “very critical”.

Indianapolis Fire Dept. spokesperson Rita Reith, said smoke from the fire that was caused by the crash could be seen from Castleton Square Mall.

Troopers said late Sunday the driver of the semi was charged with reckless homicide and criminal recklessness.

About two hours later, a man was killed on I-70, in a separate wreck when he hit a wall. Troopers believe alcohol was involved in that wreck, which was also in Indy.

No names from either wreck had been released Sunday evening.