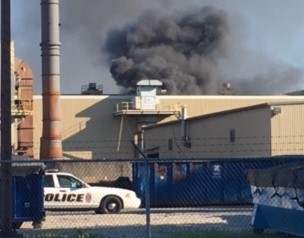 (BEDFORD) – A fire on Friday in the die cast area of Bedford’s General Motors PowerTrain Plant remains under investigation.

Bedford Firefighters were sent to the plant, which brought all three stations and other shifts in to be able to fight the blaze.

Smoke could be seen billowing several miles from the plant which brought employees, retirees, and other onlookers onsite to see what was happening.

It took Bedford Firefighter’s a couple of hours to bring the blaze under control.

The area where the fire was located was evacuated but the rest of the plant remained working and in place during the blaze. Kevin Nadrowski, Communications Manager for General Motors, says no one was injured in the blaze.

According to employees the fire started in a die cast machine and the fire went up into the ventilation system. Eyewitnesses say the fire department initially had trouble accessing the area. Firefighters used an aerial truck to bring the fire under control. The fire remained confined to that section of the plant.

The Bedford Fire Department was assisted by the police department and IU Health Bedford Ambulance Service.