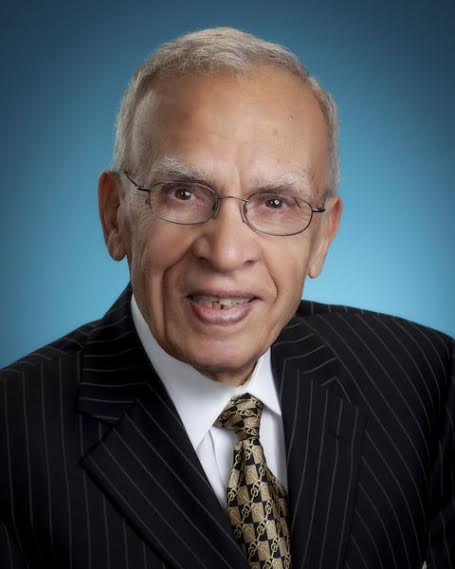 October 12, 1933 – July 1, 2017
Dr. Medhat Helmy Girgis, 83, of Bedford died at 8:18 p.m. on Saturday, July 1, 2017 at I.U. Health Bloomington Hospital.
Born October 12, 1933, in Tunta, Egypt, he was the son of Dr. Girgis Abdel Messiah and Blanche. He married Monda Aziz on September 17, 1964 and she survives. He was a long- time physician at I.U. Health Bedford Hospital and a member of Tabernacle of Praise in Bedford.
Survivors include his wife, Monda, of Bedford; three children, Dr. Kamal Girgis and wife, Shawna, Micky Girgis and wife, Angela, Moira Girgis Nikirk and husband, Jeff, all of Bedford; nine grandchildren, Vonya, Ramzi and Zahra Girgis, Bryden and Colten Girgis, Sutton and Seavor Roach, Miley and Macy Nikirk; two brothers, Dr. Talaat Girgis and Nashat Girgis of Alexandria, Egypt. He was preceded in death by his parents.
At the young age of 16, Dr. Girgis attended medical school. He had a photographic memory that allowed him to excel at a young age.
Dr. Girgis left Egypt with his new bride in 1964 with $100 in his pocket and a suitcase full of clothes. He arrived in Scotland and spent 5 years where he finished a second residency in medicine. During these 5 years, his sons (Kamal and Micky) were born. It was during these 5 years that Medhat and Monda also came to know Jesus as Lord and Savior during a Billy Graham Crusade.
They decided to leave Scotland where they traveled to New York City. It is there where their new family of 4 expanded to a 5th with the birth of their daughter (Moira). It was also during these 5 years where the New York Infirmary asked him to complete another residency since this was his first time in America. They realized quickly that he was very advanced and the decision was made for him to focus on research for a few years. After completing his 5 years of residency, Medhat and Monda decided to look for a place that would be more suitable to raise a family.
At this time, Dr. Girgis found out about an opportunity in a small city called Bedford. He happened to be looking in the back of a medical magazine and noticed a “want ad” for a physician in a rural city in Indiana. He was asked to come in and talk with several people locally at the hospital. It was during this process that he realized the city would be a great place to raise a family. He also realized that the hospital was not large like he was used to and did not have the facilities that he wanted to have for his occupation. Never the less, the hospital asked him to come and be part of the program. They accepted and decided to make the move to Bedford.
That was over 40 years ago. Dr. Girgis and his family have made a significant impact in this community over this time frame. He has received the key to Bedford, Mitchell and multiple awards from various organizations. He loved his family, he loved his city, he loved this country and he loved God. This was shown in everything he did throughout his entire life.
The Celebration services will be conducted at 11 a.m. on Friday, July 7th at Sherwood Oaks, Bedford. Entombment will follow in Cresthaven Memory Gardens. Visitation will be from Noon to 8 p.m. pm on Thursday, July 6th at the Day & Carter Mortuary.
Memorial contributions can be made for Dr. Medhat Girgis’ Scholarship Fund.
Family and friends may express condolences at www.daycarter.com.