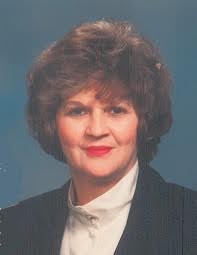 July 17, 1934 – July 29, 2016
Marilyn Joan (Cooper) Moore, 82, passed away peacefully with her family at her side at 8:35 a.m. on Friday, July 29, 2016, at Indiana University Hospice House in Bloomington.
The youngest of eight children, Joan was born on July 17, 1934 in Mitchell, Indiana to Ralph and Lula (Withers) Cooper. She first demonstrated her strong-willed, independent nature when she contracted polio as a young child and not only survived, but recovered fully learning to walk again through sheer determination not to be defeated by anything that might come her way.
Joan graduated at the top of her class from Mitchell High School in 1951 and was offered a job by Public Services of Indiana as a shorthand writer before graduation due to her academic success. From there, she built a successful career as a court reporter in Bedford, Indiana. It was there she met her husband, J. Grant Moore, Esquire. After their marriage, Joan retired and stayed home to raise their two children, Jeff and Stephanie. After her husband’s death in 1995, Joan moved to California to be nearer her daughter and grandchildren and remained there until July 2015 when she returned to Indiana.
Although Joan retired from the court system, she loved to tell stories about the many high profile cases she had worked and the characters she encountered. At the urging of her son, she began to write her memories down for a monthly column in Borderline magazine, a Southwest Virginia publication for which she later was appointed Associate Editor. Her columns were so well-received that she compiled the collection of essays to create a book entitled ‘Echoes of the Past.’ As an author, Joan held a number of book signings in California, Virginia, and Indiana.
We will remember Joan as a loving mother, devoted wife, doting grandmother and great-grandmother, and loyal friend. She was a woman known for her bright red lipstick, her role as entertainment coordinator at the annual Cooper Family Reunion, her passion for politics and celebrity news, her sense of style, her zeal for life, and her overwhelming generosity.
Joan leaves behind her son, Jeff Moore (Cyndee) of Danville, VA, daughter Stephanie Moore Smith (Steve) of Coto de Caza, CA, grandchildren Grant “Alex” Moore (Kristina) of Danville, Allison Moore (with whom she shares a birthday) of Richmond, VA, Liza Koepke (Andrew), Mallorie Smith and Grant Smith of Coto de Caza; great-granddaughters Danielle and Gracie Moore of Danville, VA and her sister Vivian Lewis of Bloomington, IN as well as an infinite number of family and friends from coast to coast.
Visitation will be from 3 p.m. to 8 p.m. on Sunday, July 31st at the Day & Carter Mortuary. A celebration of Joan’s life will be held at 11 a.m. on Monday, August 1st in the Elmwood Chapel of the Day & Carter Mortuary with graveside rites to follow at Green Hill Cemetery where Joan will finally be reunited with Grant. Floral tributes are being handled by Bailey’s Flowers & Gifts in Bedford, IN (www.baileysflowers.com).
Family and friends may express condolences at www.daycarter.com.