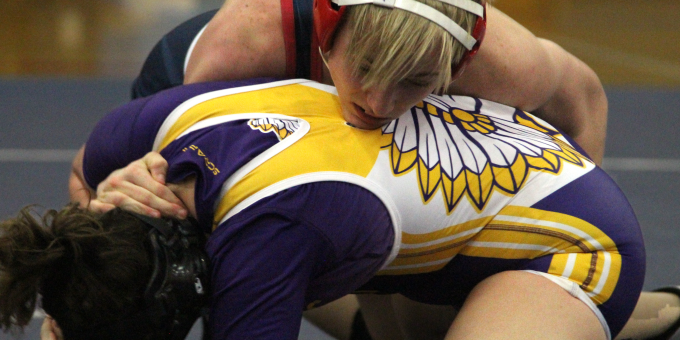 BEDFORD – The mats barely got dirty. If Bedford North Lawrence’s lightning-fast clash with Scottsburg was classified as a crime scene, there might not be enough physical evidence to prove a match took place.

In less than 20 minutes, thanks to a half-dozen forfeits and ultra-quick pins in the other eight contested weight classes, the Stars posted a 54-30 victory over the Warriors on Tuesday night. No match lasted 80 seconds. It’s doubtful any such records exist, but that has to be one of the quickest decisions in program history. Previews at the movie theater last longer. That was wrestling’s version of microwave popcorn.

The Stars had four pin triumphs and the bulk of the forfeit points, hence the lopsided team score.

“That might be the fastest dual we’ve ever had,” BNL coach Chris Branam said, shaking his head. “That’s pretty wild.”

The Warriors, battling multiple illnesses, gave away the first five matches, which almost made the final score a forgone conclusion. BNL clinched it with some impressive performances.

BNL’s other two wins earned special mention from Branam. Jaxon Powell improved to 5-0 with a 61-second pin of Nathan Byrd at 170, and Tate Tanksley made his belated debut quite memorable, flipping Alex Robinson in 1:19 at 195.

“With Jaxon, it was execution,” Branam said. “He got the takedown, controlled the guy on bottom, took him right over and pinned him. That was ideal.

“With Tate, that was his debut in the sport. He had that guy charging in on him, came close to getting taken down, and just switched it on him. That was really impressive. That’s what an athlete does. That was just athletic instinct, not something you can teach.”

While BNL was needing some valuable mat time for the lower weight classes, that will happen on Saturday when the Stars compete in the inaugural Doug Abell Memorial Old Barn Brawl, a 10-team event, at Southridge. The field will include Tennessee power Baylor, Indiana standouts Floyd Cental and Center Grove, and Kentucky’s Fairdale.

“That will be a tough meet,” Branam said. “There are some really good teams there. You rise up to the competition you see. They’ll get pushed, and that’s where growth comes from.”