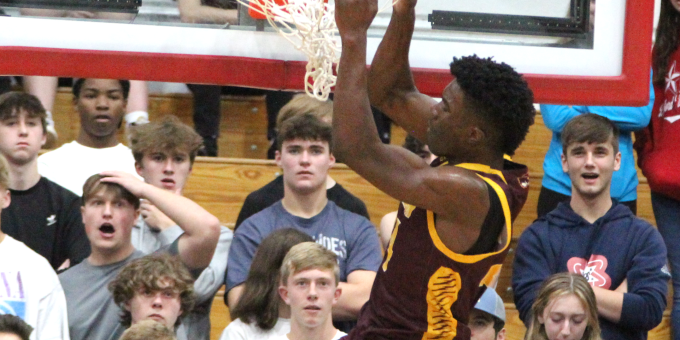 BEDFORD – Video replay, now a common crutch for officials in the college game, does not exist at the high school level. If it did, Bedford North Lawrence and Bloomington North might still be slugging it out. Nothing like a little controversy, and an argument over the legitimacy of a game-winning shot, to start the season.

The record will show North star J.Q. Roberts swished a final jumper to break BNL’s heart. Replays, slowed down to frame by frame, will show the ball still in his hands, the scoreboard clock at 0.0 in the background. But that’s where human judgment comes into play, and the official – in real time, without benefit of a second look – ruled the shot counted. And that’s the last word.

Roberts, a fantastic Vanderbilt recruit, capped a sensational opening night with a heroic shot as North escaped with a breathless 57-55 victory over the Stars. Roberts scored 31 points and added 12 rebounds, and his 12-footer at the buzzer (actually after it) finished a dramatic clash that ended in the bedlam of celebration and the pit of misery. Depends on which colors you wore.

So here’s the final scene. BNL had possession with 4.5 seconds left, going the length of the floor, but a long pass into the front court was intercepted by Lucas Vencel in front of the BNL bench. The Cougars quickly called timeout, but still had 70 feet to cover in only 3.1 seconds. Guess who was going to get the ball? Everyone knew that answer.

Roberts caught the inbound pass in the backcourt at the top of the key, took four dribbles while racing into the lane, gathered and rose, fading back just a bit. He was at the apex of his jump when the clock hit zeroes and the red light around the backboard went off. The shot swished as he stumbled back, with the referee signaling ‘Good!’ in emphatic fashion.

North celebrated. BNL coach Jeff Hein sprinted across the court to plead his case to all three officials. The Stars stood in stunned disbelief. What a way to start, and end.

Of course, there are so many moments prior to the last possession that could sway fate. The Stars will look back on two missed one-and-one free throws in the final 30 seconds. They’ll rue questionable shots after building a 10-point lead in the second half. With the No.9 team in the state on the brink of an upset, they’ll mutter about costly turnovers and what might have been.

“Whether we win in overtime, who knows?” Hein said. “We have to make free throws and we can’t turn the ball over. Those are things we can control. We didn’t get it done. But I can’t fault the effort at all. They played their butts off. They played hard, they executed the game plan. They played a very good basketball team all the way down to the wire and had chances to win it.

“If someone had told me we would be tied with 3.1 seconds, they had to go the full length of the floor to beat us, I’d say we take our chances in overtime. It happened how it happened.”

Roberts, a one-player wrecking crew, accepted the responsibility of launching the last shot.

“I just thought about all the effort we had put in,” he said. “We had to make sure we got that win. I didn’t want to go overtime. I wanted to finish the game.”

“You want to get the ball to your best player,” North coach Jason Speer said. “He made a big one. He’s got big, broad shoulders. He can carry a lot.“

He did a lot of heavy lifting, and BNL’s electric start (a 9-0 lead) dictated his immediate muscle come into play. Roberts answered BNL’s first punch with blows of his own – a 3-pointer from the corner, a drive for a 3-point play, and a steal for rim-hanging breakaway slam – to steady the Cougars.

From that point, the Stars took control. Trace Rynders and Colton Staggs buried treys from the wing, Kole Bailey dared to drive the baseline for a bucket, and Colten Leach knifed into the lane for a basket and a 29-25 lead at the half. The Stars opened the second half with two Leach buckets and two Bailey free throws for their biggest margin at 35-25.

North again responded. Dawan Daniels, quicker than a camper being chased by hornets, scored twice on breakaways following turnovers. Roberts soared to a 3-point play that cut BNL’s lead to 40-39. At 47-47 with four minutes left, Roberts swished another trey and turned a steal into his second dunk for a 52-47 advantage. The Stars were staggering.

But they recovered. Leach hit two free throws and banked home a jumper for a 52-52 deadlock with 1:30 left. After Vencel made two at the line, the Stars beat North’s press for a Rynders corner bomb and the lead with 52 seconds left. Twice after that, BNL made defensive stops but missed free throws. On the third trip, Roberts got fouled and made one shot at the line, setting up the fateful final 4.5 seconds.

Roberts was just too much. Daniels had 15 points, but it was the 6-7 senior who’s likely going to be an Indiana All-Star who made the difference. He absorbed all kinds of contact, shook it off, and finally shook off the dogged Stars and their pursuit of a signature victory.

“It’s hard to guard a D-1 kid,” Hein said. “We kept throwing different bodies at him. What an effort. He’s a good player. What do you do? He had 31 – well, he really had 29 in regulation. He had two more after the horn.”

“I just made sure to keep composure, made sure we were focused on the game and locked in,” Roberts said. “That’s what it’s all about.”

Leach, with Roberts assigned to shadow him all night, was equally impressive with 20 points and 10 rebounds. Staggs totaled 15 points, and Rynders finished with 11 while going 3-for-3 from long range. North’s length and size was the reason for a 30-22 rebounding edge and BNL’s 14 turnovers.

“It was an unforced turnover, kind of a bad shot, and they get behind us for a basket,” Hein said. “But I can’t fault the kids. They played hard.”

“We learned we have to have patience, and poise,” Speer said. “It wasn’t pretty, neither team looked great, both teams will be really good. We were just patient enough to stay in the game, and it just took one point to win the game.”

One point, and one extra .1 seconds.

The Stars will return to action on Dec. 2 at Bloomington South.