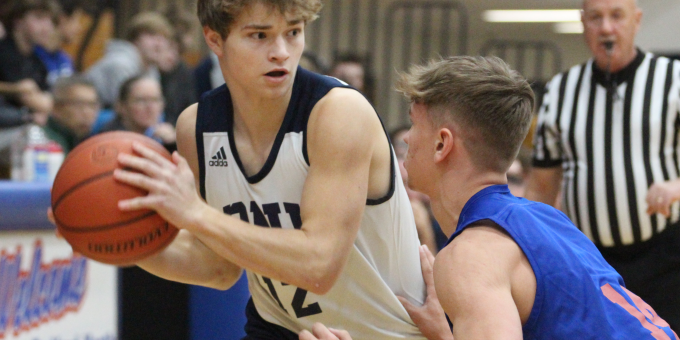 BEDFORD – Competition is a daily grind, a mindset that separates the best from the rest. No matter the contest or prize, whether it’s a test score in the classroom, or a family board game, or a footrace in practice, the true competitors hate losing anything.

For Bedford North Lawrence, the prize is playing time. Donning the jersey doesn’t guarantee an appearance on the court. That’s an earned privilege, every day, and the battle continued during the IHSAA sanctioned scrimmage on Thursday night.

Martinsville might have been the opponent for the final preseason workout, but the more important challenge was the ongoing fight for the right to party on Damon Bailey Court. And several Stars made convincing arguments for extended appearances as the regular-season opener looms.

BNL showcased depth and talent during the four quarters of varsity action, winning by a combined score of 51-42. Colten Leach, looking like his old self (except for the lack of oxygen near the end of long stints), scored 19 points and Colton Staggs added 11. They are the expected offensive stars, seniors with experience. What is still to be determined is their surrounding cast and the rotation of reserves. BNL coach Jeff Hein has promised a deeper team, but how far down his bench will his confidence go? The scrimmage gave some hints.

“We’re playing for positions,” Hein said. “I’ve told them that from Day One. It depends on who we play, as far as who gets on the floor the most. That’s part of the game, trying to find the best five every night.

“There will be competition all year long. You want that. That’s what we didn’t have last year, and maybe we got a little comfortable. Now they know they have to come in every night and compete. If they aren’t producing, they’ll be watching someone else play. And that’s a good thing. Competition brings out the best in everybody.”

Bob Knight had a famous saying about the process of butt on bench and how it impacted performance. Perhaps the Stars are taking that to heart, as they played with unusual fire and passion for a scrimmage. That translated to some quality quarters.

In the first period (three of the four were played with a running clock), played with strict man-to-man defense, BNL finished with an 11-5 lead. After the Artesians shot to an 13-11 advantage in the zone-mandated second quarter, the Stars pressed and raced to a 20-10 edge in the third. That dominance continued through the first half of the final frame, when BNL tired and Martinsville’s Grady Gardner swished three straight treys for a 14-9 difference.

Leach was the difference maker, doing his most damage in the lane. He had seven buckets in the paint, and he added five assists (four of them kickouts to open teammates for treys). He got a little winded, the lingering effects from his injury recovery. Everything else was in mid-season form.

“It’s just conditioning, just like everyone else,” Hein said. “All of them are that way. But I think we have more depth than we did last year. It enables us to go to the bench and not miss as much.

“The effort was there, the energy was high, they played for each other. That’s what I’m looking for first. Things will take care of themselves if they continue to do that.”

Other highlights included three 3-pointers from Staggs, three more from Noah Godlevske, and the energy from Kole Bailey. There were some issues, including an alarming number of offensive rebounds by the Artesians, and the inability to locate Martinsville shooter Brody Staggs, but there was reason for optimism.

“I saw a lot of positives out there,” Hein said. “We’ll continue to work, go back to the drawing board, get ready for Tuesday night.”

Staggs had 17 points for Martinsville. The Artesians will host BNL on Jan. 3, and both teams could look dramatically different by then.

“Hopefully it’s sooner than later,” Martinsville coach Kip Staggs said. “We have to find some depth. We have five seniors but we need guys to go with them. We learned we have a lot of work to do. We had a few bright spots. It was a good contest for us to see where we are.”

The Stars also won the reserve quarter 13-4 with two jumpers by Godlevske and two rebound buckets by Logan Miracle.

BNL will host Bloomington North in the regular-season debut on Tuesday.