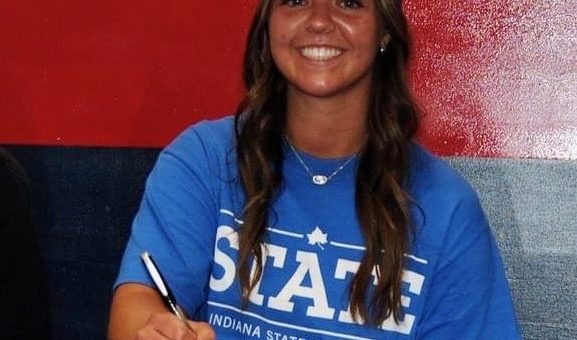 BEDFORD – Annie Waggoner didn’t change her mind. And there was no danger of that. Almost exactly a year after announcing her verbal commitment, she put her autograph on paperwork to finalize her college decision and destination.

Waggoner, Bedford North Lawrence’s superb senior hurler and Miss Softball candidate, officially signed with Indiana State on Friday afternoon. She will join the pitching staff for ISU coach Mike Perniciaro as one of the recruiting prizes in the state.

That signature was done with permanent ink, no smudges. Her decision was just as solid. No wavering. “It’s a seal-the-deal kind of moment,” Waggoner said.

She’s been the real deal for the Stars. Her numbers have been sensational. Last year, she went 20-3 in the pitching circle with a 1.31 ERA and 198 strikeouts. She also hit .418 with four home runs and 27 RBIs as the Stars went 28-3 and advanced to the Class 4A semistate for the second straight year. She was named All-State by the Softball Coaches Association of Indiana.

As a sophomore, Waggoner was 20-2 in the circle with a dazzling 1.78 ERA (including 179 strikeouts), and she hit .404 with 8 home runs and 36 RBIs. BNL went 28-5 that spring. She missed her freshman season with the Stars when the virus outbreak forced the cancellation of IHSAA spring sports.

Her focus now shifts to off-season improvement (ball speed, command and her mental approach) and her senior campaign, especially the quest for a state championship.

“I’m just thinking about all the things we’ve done in the past, trying to build on that, and try to go all the way this year,” she said. “Everyone knows we can.

“I’m so excited, it’s grind season and sometimes that’s hard to get through. The light at the end of the tunnel is March.”