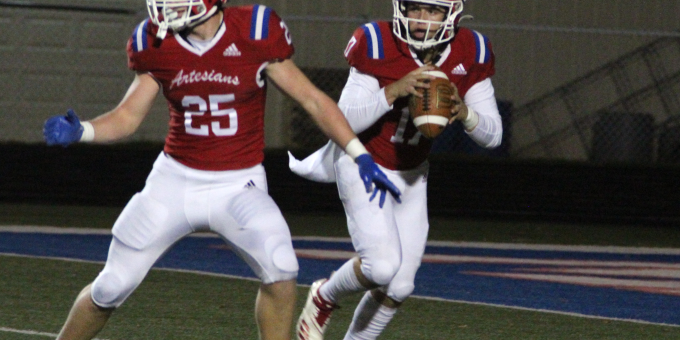 MARTINSVILLE – Scanning, targeting, identifying, executing. Martinsville quarterback Tyler Adkins was football’s version of the Terminator. He didn’t feel pity, or remorse, or fear. And he absolutely did not stop . . . ever . . . until Bedford North Lawrence was dead.

Nearly perfect, unstoppable and robotic in his precision, Adkins threw everything at BNL’s doomed secondary, a passing frenzy that was fancy in style and flawless in performance. And unlike Arnold, the Stars won’t be back.

With a thrower from another dimension, with a receiver on his own wavelength, with a runner that shakes, shrakes and bakes, the No.14 Artesians smacked BNL 42-14 in the Class 4A Sectional 23 semifinal on Friday night. Martinsville (8-3) advanced to the final to face No.4 East Central, while BNL finished a gallant season at 6-5, still searching for the first-ever win at Siderewicz Field.

Adkins was simply sensational, completing 15 of 17 for 334 yards and two touchdowns. Garrett Skaggs, his favorite target, caught 8 for a whopping 178 yards, and running back Brayden Shrake raked in 106 yards with two scores. That was way too much firepower for BNL, which gave up two touchdowns during the final 90 seconds of the first half and two more during Martinsville’s first two drives of the second half.

Machine or mannequin? Adkins was Mr. Roboto. His heart is human, his blood boiling with information, his brain from IBM. And he had all day to stand in the pocket. Could have posed for pictures.

“He’s unbelievable,” Martinsville coach Brian Dugger said. “He’s a kid, and a lot of people don’t know, he does a lot of the decision making out there. He’s dialed in. From Day One, I’ve tried to put as much of my brain into him, and stay out of his way. Because he’s really good.”

No argument from BNL. The Stars, who fell to the Artesians 28-14 in the season opener at BNL in August, made their case with early success, battling within 14-7 with a gorgeous touchdown pass from Memphis Louden to Ryker Hughes. But from that point, Martinsville exploded and BNL suffered the shrapnel wounds. By the time the eruption ended, the clock was running nonstop. It’s a shame it had to end that way, but mercy, what a show.

If there was a turning point, it came following the first BNL touchdown. Martinsville was reeling, facing 2nd-and-20, and BNL’s pass rush made its only true appearance, forcing Adkins to scramble. The ball hit the turf, Shrake scooped it up and dashed 11 yards. Next play, Skaggs made a great leading catch for the first down. Four plays later, Skaggs streaked free down the right sideline for a 34-yard touchdown catch with 1:29 left in the half.

And then the most fatal blow. The Stars went three-and-out and used up only 43 seconds. Martinsville took over at midfield with way too much time on its hands. Boom, Adkins to Skaggs for 37 yards. Boom, Shrake shook loose from the 12 for the gut-punch score. Two plays in 11 seconds and a 28-7 lead. BNL wasn’t coming back.

“We just couldn’t finish out that half, make that timely stop,” BNL coach Derrick Barker said. “We could never get back on the positive side of field position. You give them a short field, they’re dangerous.”

Martinsville’s first two drives of the second half were both beautiful and brutal. Adkins hit tight end Josh Jones twice during the first one, with Jones snagging an 18-yard strike for the touchdown. The next possession featured the final Adkins-Skaggs connection, for 18 yards, and Skaggs scampered home from a yard out to trigger the mercy rule.

BNL’s best moments were a fourth-down stop on Martinsville’s first possession, and the touchdown that cut into Martinsville’s two-score lead. The Artesians took control with a 91-yard drive, capped by Hunter Stroud’s 1-yard sweep, and another two-play lightning strike (Adkins to Trevor Hott for 56 yards, setting up Shrake from the 6 for a 14-0 lead). Louden, after three straight runs on the quarterback option, faked a fourth, pulled up and lofted a perfect 56-yard strike to Hughes with 4:57 left in the half. And then everything fell apart in a hurry.

“Giving up a big, long touchdown, it’s easy to hang your head,” Dugger said. “But the offense strapped up and said ‘Let’s go.’ It turned real quickly.”

Skaggs was a constant menace, locating holes in BNL’s soft zone or leaving a defender behind with quick moves.

“We let the receivers get running head starts, and our safeties were back there in no-man’s land,” Barker said. “They’re way too good for that. And that kids can put the ball wherever he wants. Once he got comfortable back there and knew what we were doing, he was good. He was able to throw it everywhere on the field – inside, outside, deep, short. They made the plays.”

“We saw some things from the first game that we thought Garrett would take advantage of,” Dugger said. “We didn’t think they could leave him one-on-one and Garrett not be able to win.”

Louden paced the Stars with 69 rushing yards, and he completed 8 of 13 passes for 91 yards with the two touchdowns. But BNL was limited to only 218 total yards (and Louden was about the only real threat once Cal Gates left with a shoulder injury midway through the second quarter). The Artesians totaled 471 yards.

“Our defense did their job,” Dugger said. “When you play a team that runs the option so well, you have to play assasigment football and be gap sound.”

East Central, the defending sectional champion, walloped Silver Creek 42-6 in the other Sectional 23 semifinal. Martinsville hasn’t won a title since 1996. BNL has now lost 21 of the 24 meetings in the Martinsville series.