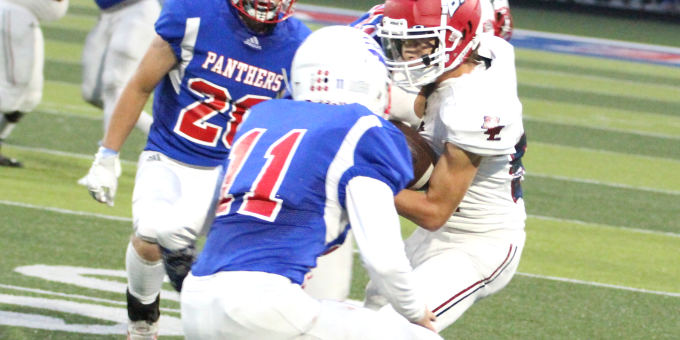 BEDFORD – Leave a legacy. Seniors talk about that a lot, passing on something to future generations, being remembered long after their departure. Bedford North Lawrence’s 21-player senior class, preparing for the final farewell, has a chance to be immortalized.

The Stars will battle a nemesis for a share of the Hoosier Hills Conference title, facing Columbus East in the regular-season conclusion at BNL Stadium on Friday night. After celebrating Senior Night, BNL will chase its first conference championship since 2006. Seymour (5-1 in the league) has already secured a piece of its first HHC crown since 2001. The winner of the BNL-East battle will also reach 5-1 in the conference.

For BNL (4-4 overall), which has won only six league titles in history, it doesn’t get any bigger than this. Senior Night usually takes precedence, but that’s getting overshadowed by the enormity of the contest.

It’s appropriate for this BNL class to get this opportunity. Most of them have been three-year starters, and they paid dues. Conquering East, which was the beast of the HHC until last season, which has blasted BNL 17 consecutive times, would make it even sweeter.

That doesn’t mean it will be easy. East (4-4 overall) will test BNL’s toughness and vitality. The Olympians built a dynasty – 17 straight HHC titles, 96 consecutive wins in league games – on lines with the strength of Hercules and the power of Zeus. That hasn’t changed. BNL has often been intimidated by the East aura. That has to change.

“There’s no reason not to be fired up, especially with Senior Night,” BNL coach Derrick Barker said. “It always means a little more. But it doesn’t matter what grade you’re in, you should be fired up for this game. That has to be the main focus. We’ve got a great senior class we’re going to honor, but it will be a lot better Senior Night if we get the win. We have to make sure we focus on what’s important.”

The seniors, including 14 starters, should not share the spotlight. They’ve earned this time to shine. As middle linebacker Reid Parker looked back, he pointed out, “The days go slow, but the years go fast.” And the older he gets, the more he’ll realize how true that is.

“I look back, and it seems like yesterday that I was a freshman,” senior linebacker Tyson Patterson said. “But it also feels like an eternity.” And in football terms, it’s been that long since BNL’s 33-30 win over East in 2006. East certainly never forgot it, using that outcome as a rallying cry for years to come. Revenge was exacted many fold, including last year’s 31-15 victory.

East pounded BNL into submission during that clash, crunching out 25 first downs, with 76 running plays (none longer than 11 yards), with 14, 15 and 16-play scoring drives that were relentless and ruthless. Tryce Villarreal ran for 129 yards and two touchdowns, quarterback Ethan Duncan added 109 rushing yards. And that was after BNL’s Zane Anderson broke the first play of the game for a 68-yard touchdown run.

“We tried to eliminate the big play and make them put drives together,” Barker said. “We did that, but we weren’t able to get off the field on third down. It’ll be much the same this year. They’re still really good at lining up and running. It will come down to us stepping up to the bully and holding our own, win the line of scrimmage.”

Duncan returns to lead the East attack. He has completed 61 of 118 passes for 657 yards and 5 TDs while rushing for 342 yards and five more scores. Javeon Smith is the rushing leader with 498 yards and 4 TDs. BNL’s defense has been solid against the run this season, allowing 3.5 yards per carry.

East suffered a 14-12 loss to Floyd Central (with BNL beating the Highlanders 13-10 two weeks ago), but when comparing scores the Seymour finals (East won 34-12, BNL lost 27-6 to the Owls) must be included in the equation. And BNL is coming off a disappointing 21-14 loss at Madison.

“Last week left a bad taste in our mouth, but the kids have done a good job of flushing that out,” Barker said. “It’s over, the game is in the past and there’s nothing to do about it. You can’t let Madison beat us twice. We can’t let them beat us last week and we mope around, feel sorry for ourselves, and they end up beating us this week. We have our hands full with East.

“We have to finish drives. That’s been the key in a lot of games. We need to get off to a fast start, get the ball moving and get some points on the board. That would be huge.”

“The seniors can embrace it because it’s their last chance, but for the young guys they need to realize you never know,” Barker said. “It’s not something that happens every year. Hopefully it is, and it’s the first goal we talk about every year. It’s the biggest goal for us, it does mean something. It’s an awesome opportunity.

“The seniors have been huge. A lot of them have played since they were sophomores, they took some lumps from being young and inexperienced. They stuck with it, they’ve left a really good example of how much progress you can make with some hard work, gutting it out.”

Last meeting: Last year at East, the Olympians overpowered the Stars 31-15. East totaled 25 first downs. Tryce Villarreal ran for 129 yards and 2 TDs. Zane Anderson broke a 68-yard touchdown on the first play of the game for the Stars.

Game notes: BNL is chasing its first HHC title since sharing the championship with East in 2006. East has won 17 straight in the series. The Stars have won six HHC titles in program history. The winner will share the title with Seymour.