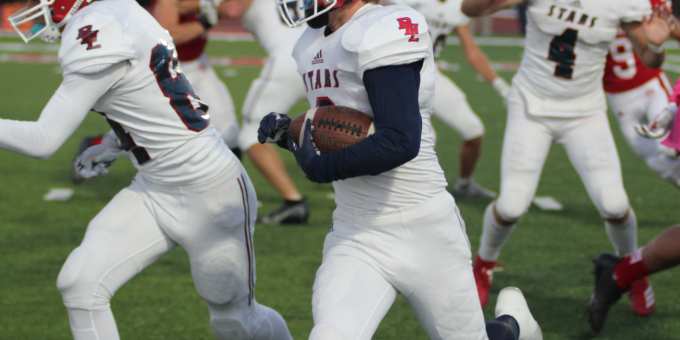 BEDFORD – Bedford North Lawrence will make its postseason debut in a new sectional against a totally new opponent.

The Stars (4-4) will travel to Shelbyville (1-7) for the first round of Class 4A’s Sectional 23 on Oct. 21. BNL, which will start the chase for only its second sectional title, has never played the Golden Bears. That winner will face either No.8 Martinsville (6-2) or Greenwood (1-7) in the semifinal.

In the bottom half of the bracket, Silver Creek (3-5) will travel to Jennings County (2-6), while Edgewood (1-7) will tangle with No.4 East Central (7-1 and the defending sectional champion). The semifinals will be set for Oct. 28, with the championship game scheduled for Nov. 4.

“It’s exciting to play a team we don’t play every year,” BNL coach Derrick Barker said. “There’s some newness there. It’ll be fun to see a new opponent.”

While Shelbyville (which is playing its final season on natural surface) is an unknown challenge, its head coach is a familiar foe. Former Floyd Central and Jeffersonville coach Brian Glesing took over the struggling program in 2021 and immediately ended a 26-game losing streak. The Golden Bears (who have never won a sectional) posted their only win this season against New Castle, but they’ve suffered five mercy-rule losses against powerhouses in the Hoosier Heritage Conference.

“We’re very young,” Glesing said. “We’re building. We’re just plugging away. We’re excited about the direction of our program, but we’re not where we need to be.

“I think Bedford is excited to draw Shelbyville, and Shelbyville is probably happy to draw Bedford – just because it’s not East Central or Martinsville.”

BNL has also had limited postseason success with an 11-37 record in program history. After facing Columbus East with a share of the Hoosier Hills Conference at stake this week, the Stars will have a chance to add to that.

“There’s always excitement,” Barker said. “In the tournament, everybody resets at 0-0. Everybody has that shot. We have to make sure we’re playing our best game, taking care of our business, so we can have some success. There’s not been a lot of sectional games that we’ve won, so every one would matter. Every one is a good opportunity. We’ll try to build some momentum and confidence.”