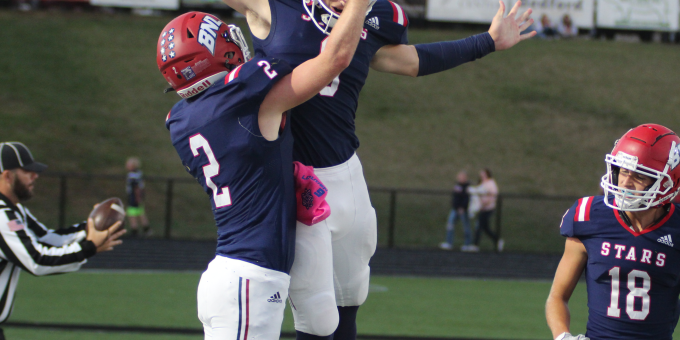 BEDFORD – They lifted him onto their shoulders, chanting his name, the moment of dreams. Just minutes earlier, Billy Cline shouldered an entire program on his back, lifting Bedford North Lawrence to the heights of ultimate joy and the brink of a championship.

”Bil-ly! Bil-ly! Bil-ly!” He’ll never forget that snapshot, fist raised in celebration, the hero of an unforgettable victory as the Stars conquered a nemesis, took a huge step toward a Hoosier Hills Conference crown, and ended an insufferable home losing streak. All with the swing of his right leg.

Cline’s 31-yard field goal with 6 seconds remaining kicked BNL to a breathless 13-10 triumph over Floyd Central on Friday night and solidified BNL’s earned status as a league contender. The Stars, thanks to that clutch game-winning kick, moved to 4-1 in the conference and set up a title showdown with Columbus East in two weeks.

”Bil-ly! Bil-ly! Bil-ly!” It’s the scenario every athlete envisions, the chance for immortality. And the kid who had never played football until this season, a soccer star recruited to do double duty, with nervousness tingling through his body as the enormity of the situation weighed on him, came through. Good snap from Garrett Hayes, good hold from Tyson Patterson – Boom! Let the chants echo and ring.

That field goal heard ‘round the league was the culmination of several key events. BNL (4-3 overall) took over for its final possession with 1:35 left when defensive lineman Greg Gilbert power surged into the backfield to sack Floyd quarterback Tristan Robertson and force a fumble. Braxton Brown swooped in behind Gilbert to fall on the loose ball.

Two plays later, quarterback Memphis Louden hit Kole Bailey on a quick slant to convert a third down. Cal Gates followed with a 3-yard plunge to the 14, and from there BNL coach Derrick Barker allowed the clock to tick down, as the home crowd murmured and the tension exponentially increased. Finally, a timeout at 9.5 seconds. And out trotted the special teams unit. The Highlanders called a timeout to let Cline think about fate and the impact of his kick – not only on this contest but on the HHC race.

“I had all the faith in the world in him,” Barker said, justified in his belief. “They were trying to ice him, and he had no idea what they were doing. He hasn’t been there. But he knows to kick the ball through the uprights.”

Well, he knew. Cline might have looked cool, but he was not. Kickers are high-maintenance people anyway, and the enormity of the next snap was not lost. Who knows what would have transpired in overtime? “It made me scared,” Cline said. “I figured if I missed it, we would be screwed. I was really nervous. I was shaking. But I hit it.”

So how did BNL get to that stress point? Through more curves, twists and momentum turns than a crooked highway.

The Stars started strong, with the first 10 points. The opening drive, which included a 22-yard Gates blast, yielded Cline’s 30-yard field goal. On the first possession of the second quarter, BNL struck with a 57-yard touchdown pass from Louden to Dylan Nikirk, who made the deep catch, cut a sharp angle through traffic and dashed into the left corner of the end zone.

After BNL’s next drive was swamped by penalties (and that would be a problem all night), the Highlanders pulled even as Robertson connected with Branham for catches of 36 and 18 yards, then found Jordan Fonda in the left corner from 9 yards for the 10-10 deadlock at the half.

The second half was fast but not painless. BNL managed only two first downs after intermission, and Floyd was in threatening position. The most dire of those ended on the final play of the third quarter, when BNL’s Ryker Hughes intercepted a pass in the end zone.

Late in the fourth, BNL was forced to punt (for the sixth time) and Kline Woodward (forced into emergency service when Hughes suffered an injury while attempting to catch a deep ball) dropped his left-footed punt to the 3-yard line. That set the stage for the Gilbert sack (his second and BNL’s fourth), for the Brown recovery (the second of three Floyd turnovers), for the Cline boot.

“It’s amazing, especially over Floyd,” Gilbert said, recalling Floyd had won the previous four meetings in the contentious series. “That gives us so much momentum. It was phenomenal.“

“Gilbert came off the edge, knocked it loose,” Brown said of his vantage point. “I was debating whether to try to scoop and score, but I fell on it and played it safe. And Billy Cline finished the job. I’ve never felt that kind of atmosphere.”

Robertson, adept at the play-action fake and the deep throw, completed 17 of 24 for 225 yards but was picked twice (including Trace Ryders on the last desperate fling). Grangier and Branham both caught six passes each. BNL, which got bullied into submission in last year’s loss, surrendered only 71 rushing yards.

“They were just amazing,” Barker said. “That’s a good offense and we knew they would be able to throw the ball. Could we be the hammer, be more aggressive? The secondary did a good job of covering and GIlbert was unblockable. That’s what championship teams do. You have to be able to take the ball away. They were able to rise up and make a play.”

Gates finished with 103 rushing yards, while Louden hit his first eight throws and completed 11 of 15 for 141 yards. The fast start was as crucial as the defensive finish.

“The game would come down to how we started, and being smart with clock,” Barker said. “We had to stay in the game early, we couldn’t lose it in the first quarter. They came out roaring.

“There were a lof of big plays, good and bad (BNL was penalized 13 times for 115 yards) They went above and beyond, played an amazing game. I can’t put into words how proud I am. Tonight, when we would make a mistake, we would answer it. That was the difference.”

BNL will now host Columbus East on Oct. 14 as it chases its first HHC title since 2006. But wait, there’s work before that. The Stars will visit Madison next week.

“East will be big. We have a big game next week, too,” Barker said. “We have to take care of business down at Madison. We can’t have an emotional letdown and have a bad week. It’s where we want to be.”