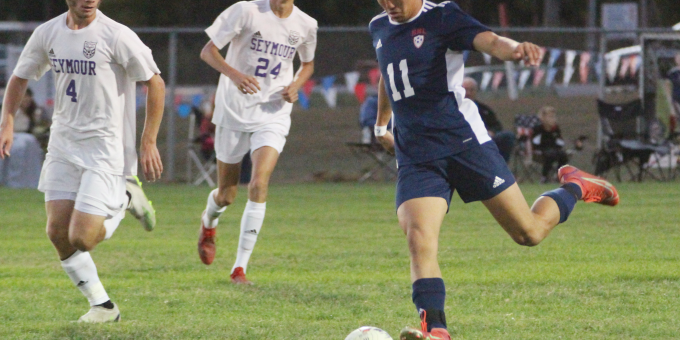 BEDFORD – The luck of the bounce. The first Bedford North Lawrence shot crashed off the post, the first good Seymour chance got ricocheted like a pinball before finding the net. And that was the ultimate difference between two conference rivals destined for a quick rematch.

The Owls converted a corner kick into a first-half goal, and their hardened defense survived BNL’s pressurized attack in the second half for a tense 1-0 victory on Thursday night. That sets the tone for the sectional semifinal next week at Seymour, when the two Hoosier Hills Conference foes will collide again with much more at stake.

BNL, playing its home-field finale, couldn’t find a big enough crack in Seymour’s defense, although it wasn’t for a lack of trying. The Stars (6-6-2 overall, 2-2-1 in the league) spent the bulk of the second half on the offensive end, with intensity leading to urgency, leading to desperation as the clock ticked. Seymour goalie William Smith didn’t blink.

BNL almost had one of the quickest goals in program history. On the first flurry of the opening minute, Adriano Sullivan got free for a rocket blast that banged off the right post. That wouldn’t be BNL’s last look at a goal, but it was the best.

“We had that chance,” Otis said. “It could have changed the whole dynamic of the game. That was big.”

Seymour (6-7-1, 3-2-1 in the HHC) dodged that bullet and found the target less than 10 minutes later. Off a corner kick, the ball deflected off two feet before Myles Chandler poked it past BNL goalie Brayden Miller at 31:14.

“The goal we gave up, we can’t let that happen,” Otis said. “The ball bounced around way too many times. We have to clear that out.”

”The first five minutes, we were still on the bus,” Seymour coach Matt Dennis said. “That’s not the way we want to play. We settled down and played our game, got some good opportunities that ultimately led to the corner where we scored.”

In the second half, the Stars had the Owls locked in a hydraulic press, applying force. BNL, for a brief moment, thought it had scored the equalizer. The official awarded an indirect kick off a Seymour foul near the top of the penalty box. BNL’s Joseph Brazzell thought it was a direct kick, and he blasted the ball home at 11:20. But that goal was disallowed.

The shutout shouldn’t be a surprise. Seymour’s offense has been inconsistent, but the Owls have allowed only 16 goals all season.

“Our defense is there when we need it,” Dennis said. “We were forcing them to make some passes they didn’t want to, and that allowed our defense to play a little more free. In the second half, we were setting deeper and deeper, so I guess it’s good to know we can defend for 35 minutes, even though it’s not something we want to do.”

BNL and Seymour will clash again in the Class 3A sectional on Wednesday night.

“Unlucky to draw them and play two games in six days, but it was fun,” Dennis said. “We’re looking forward to the rematch.”

BNL will have one more road test, visiting Floyd Central on Saturday. The Stars will be in the spoiler role, as the Highlanders (4–0-1 in the HHC) can win a share of the league title with a victory. New Albany has already finished HHC play with a 5–0-1 record following a triumph over Jennings County on Thursday.