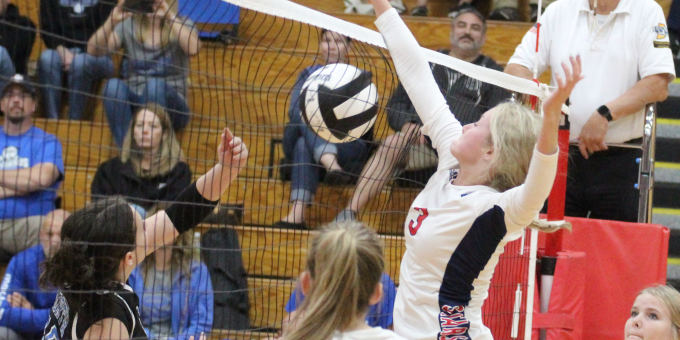 BEDFORD – Nobody would lump Bedford North Lawrence volleyball, in its current form, among the ’one percent’ in the game. That’s the ultimate goal, to be mentioned among the elite. Right now, the Stars will settle for small steps of growth and improvement. One percent at a time.

The Stars flashed some of that promise with their best set of the season. But a struggling start and a flat finish were the bookends of a four-set setback against Columbus North on Tuesday night. The Bull Dogs growled to a 25-17, 25-20, 20-25, 25-14 victory.

If the Stars (2-17) could duplicate that sensational third set every night, they’d soon move into a higher tax bracket. With two freshmen in key roles, BNL showed what could be ahead, which would make the growing pains worthwhile. Two lengthy and impoverished skids showed how tough getting to that level will be.

North (11-12) opened the first set with a 15-1 blast, closed the second with a deciding run, and finished the fourth with the final flurry. Here’s the crazy, encouraging and frustrating stat of the night: after the 15-1 start, BNL outscored North 68-62 until the middle of the fourth set.

“Things were clicking,” BNL coach Whitney Carroll said. “If we’re getting one percent better every game, we’re doing good. And that third game, we got a lot more than one percent better. It was really good to see it all working.”

Trailing 2-0 in sets, BNL went to work, with Harley Tanksley serving six straight points en route to a 9-3 lead, with Camryn Anderson and Anna Williams smacking kills during that run to force a North timeout for regrouping. Sammie Gratzer kept it going with a kill off a blocker, Annie Waggoner scored with a push to the corner to squelch a brief North comeback, Hayley Davis crunched a kill, and Anderson served an ace to cap the set.

North took momentum back midway through the fourth set. At 7-7, the Bull Dogs broke the leash and bolted, with Logan Branstetter serving back-to-back aces, with Karen Dutro scoring three consecutive points at the net, with Kaitlin White slamming down a block kill for the cliching point.

“We knew we could do better,” North coach Jenna Ortega said. “We weren’t playing our game, We had to refocus and prove we wanted it bad enough. We started getting in our heads a little bit, got in a hole we tried to work out of, that happens when we fall apart.“

Dutro, a hard-hitting freshman, finished with 17 kills while Branstetter added 9 at the net.

“We have a lot of encouraging young girls that are stepping up,” Carroll said. “Trinidy setting, and Sammie on the outside, they’re a pair that’s beautiful to see. Our back row is starting to talk more, there was a lot of talking on that court. That was working so well. We were one group, working as one unit, and having fun.”

BNL will host Jeffersonville on Saturday, then learn its sectional fate when the IHSAA announces the tournament draws on Sunday.