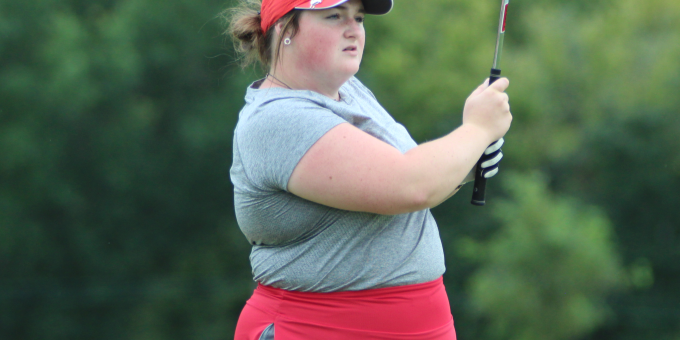 BEDFORD – Nora Howat, the lone upperclassman on the Bedford North Lawrence roster, will take her final victory laps of her second home this week. It’s the farewell tour every senior dreads, when the memories swell to the surface, when she tries to absorb every detail during her last looks around Otis Park.

Howat started her lonely trip down Memory Lane on Monday afternoon as the Stars conquered Mitchell in the annual county test on the front nine. She’ll celebrate Senior Night on Thursday, then compete in the IHSAA sectional on Saturday. The countdown is now serious. These are the last days.

With Howat anchoring the fifth spot in the lineup, the Stars breezed to a 171-251 triumph over the Bluejackets. Kinleigh Root fired a 3-over 40 and Kenley Craig added a 41 to lead the victory march. But during this final week of the regular season, the focus shifts to the player who made it quietly through four years.

She used to be content to stay in the shadows, but seniors can’t do that. Howat is the elder stateswoman on a very young team (only two other juniors among the 11 on the roster).

“That was really nerve-wracking this year, to step into that position,” Howat said. “It’s asked a lot of me. I’ve not been known for my sportsmanship, and that had to change. It’s being the oldest one of the group and making decisions.

”They always say golf is a sport of integrity. That’s definitely been a huge part of it for me, how accountable you have to be for yourself. And it’s the relationship with teammates. It’s incredible to see them grow throughout the season.”

Growth can be measured by scores as they drop, or by maturity as it rises. For BNL coach Kori Johnston, having a senior to solidify the back of the lineup has been a blessing.

“I like having that senior,” Johnston said. “She has experience, she’s used to the golf courses and the pressure of tournament play. She’s a leader. She’s almost like an assistant coach. She can give guidance to some of the younger girls.”

Howat was her normal steady self, posting a 46 to complete the team scoring. Now she’s down to two more long walks before this chapter of her life closes.

“It’s going to be really bittersweet,” she said. “I’ve given a lot to the team over four years, but for me it’s one of the last steps in golf. It will be hard to tell all those memories goodbye. It will also be good to see what chapter comes next.”

BNL’s next chapter is preparing for the postseason and chasing another sectional title. The rounds from the Kinleigh-Kenley duo were a positive step in that direction. Root birdied the par-5 sixth hole, chipped in for par on the devilish eighth, while Craig parred four of her final five holes to finish in style.

“They finally played, which is awesome to see,” Johnston said. “Those are the scores I was expecting all season. It’s good to have them now, to see them shoot what they’ve capable of shooting.”

Chloe McFaddin had four pars on the closing holes to offset a tough start and fired a 44. Emerie Russell and Malaya Tanglao had 59s for the Bluejackets, whose projected best player (Anna Sowders) is currently in Germany as a foreign exchange student.

BNL will host Springs Valley and Brownstown on Thursday.