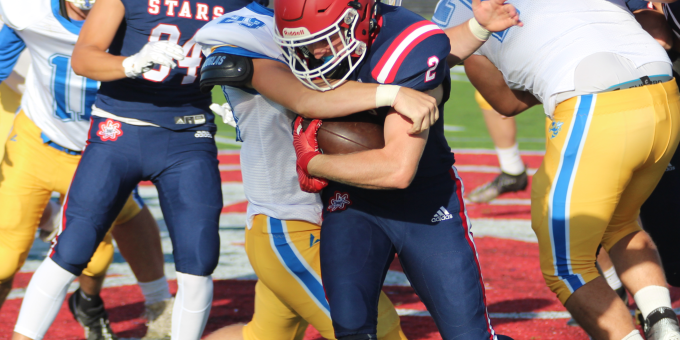 BEDFORD – Everyone, with the exception of a dentist or dietician, loves a cupcake, so sweet and delicious. Now there are even Food Network shows (if a viewer is starved for entertainment) and contests to determine who bakes the best.

Football coaches love them, too. While most members of that fraternity appear to have eaten more than their share, their favorites aren’t the edible confections. It’s the guaranteed win of an easily-devoured opponent. Those are the “cupcakes” teams can grow fat on in the win column.

Bedford North Lawrence’s Derrick Barker would love one of those on the menu to start the 2022 campaign. But like dear ol’ Mom always said: “No dessert until the plate is finished.” The Stars will have to chew on a mouthful with their first bite.

The Stars will get their first taste of the regular season on Friday night when they welcome menacing Martinsville, ranked No.17 in the Class 4A preseason poll, for the opener. The Artesians, bringing back the bulk of their dynamic offense from last season, present a main-course challenge for the hungry. Will BNL’s eyes be bigger than the stomach? The Stars will find out.

”It’s a good thing to get that competition right out of the gate,” Barker said. “We’re certainly not jumping in with any cupcake. They’re a very good team, they’ll put a lot of pressure on us. We’ll find out a lot right away, what type of team we are and what kind of defense we are.”

BNL’s defense, which made definite strides last season, will be under fire. Martinsville will feature senior quarterback Tyler Adkins, an exceptionally accurate passer (67 percent a year ago), and a stable of weapons. While his main target from last season (Chase Mabry set a school record with 98 receptions, totaling 857 yards and 12 touchdowns) graduated, he can still chose from receivers Garrett Skaggs (44 catches for 625 yards) and Luke Cheatham plus running back Brayden Shrake.

“We really like where our offense is right now,” Martinsville coach Brian Dugger said. “We are really excited for Tyler this year. His development and maturity have skyrocketed, and he is fully running the show out there. We trust Tyler to get us in the right play and make the right read every time. Honestly, I’m just giving him as much info and tools as I can and then getting out of his way. We feel we can be explosive as long as we continue to take what is given to us and take care of the ball.”

Of course, BNL will feature its own experienced and explosive offense, led by junior quarterback Memphis Louden (1,346 passing yards and 13 TDs last year) and his quartet of talented receivers. Dylan Nikirk (24 catches for 479 yards), Ryker Hughes (23 for 453 and 5 TDs), Kole Bailey and Colten Leach (finally healthy to make an impact) will cause some headaches in the secondary.

“Coach Barker has done a great job and has really made huge strides on offense,” Dugger said. “You can tell the kids are bought into what he is selling. That offense has a chance to be really good this year. Louden has made big strides and you can tell he works hard at his craft. He has really good feet, confident in his reads, and gets the ball out quick. On top of that he throws a darn good ball. My guess is they will put points up this year and surprise some people with how well they throw it around.”

So now the question mark rests on the defenses. Which one rises up to do damage? Last year, that was Martinsville, which forced five turnovers during a 45-14 triumph. The Stars coughed up seven fumbles, gave up 17 points off turnovers, fell behind quickly and never really recovered. That’s not the recipe for success.

“You can’t have that number of turnovers, not against a team of their level,” Barker said. “You can’t fall behind like that, you can’t rely on coming back from a two-score deficit. We have to keep things clean and not beat ourselves.”

Is BNL ready? The Stars showed promise in the preseason scrimmage with overmatched Mitchell, scoring eight times and allowing only one score in the final series. Martinsville, meanwhile, faced Columbus East in its scrimmage and earned praise from Dugger for its performance. Barker also handed out high marks after reviewing BNL’s scrimmage video.

“We’re getting there,” he said. “I was pleased with the scrimmage. The kids have been working hard, I’ve really been impressed – all the way back to the start of the summer – the work ethic has been awesome. We haven’t had any bad days, hopefully we keep rolling and be ready to go. I’m excited for it. I think we’re mentally tough enough to be resilient and answer. If we get out to a fast start, I expect they will answer. If they get out fast, I hope and expect we will answer.“

“As long as we come out on top, we’ll take it,” Barker said. “This early in the year, you really never know. It comes down to turnovers, which team can make a stop in the red zone, that type of thing. At the end of the day, we have to take care of our business. Play our game, no mental mistakes, especially defensively. If we bust a coverage or miss a tackle, they’re explosive enough to take it 90 yards right away. We can’t have those fatal plays.”

Last meeting: Last year at Martinsville, Tyler Adkins threw for 218 yards and 3 touchdowns as the Artesians cruised to a 45-14 win. The Stars had 7 fumbles (5 turnovers). Memphis Louden ran for a score and threw for another for BNL.

Game notes: Martinsville has won the last four meetings (since the series was renewed) by a combined score of 143-48. BNL’s last win over the Artesians came in 1992.