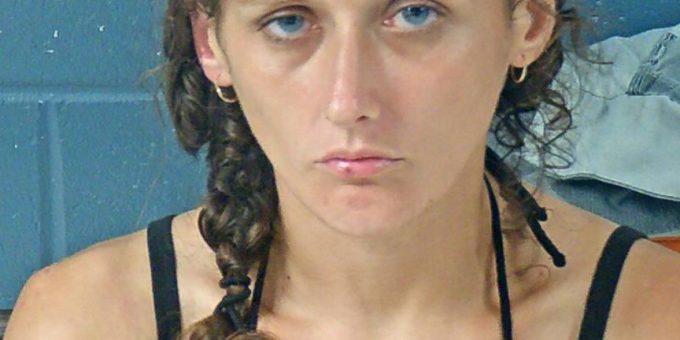 BEDFORD – A Bedford woman was arrested on drug charges this morning when Bedford Police officers were called at 2:02 a.m. to the area of 27th Street and Washington Avenue after a complaint a male and female were looking in the caller’s backyard as they were walking down an alley.

The caller said the female was pushing a shopping cart.

When police arrived they located the female pushing the shopping car on 30th Street near the intersection of R Street.

That female was 39-year-old Jessica Douglas.

Douglas told the officer she did throw something in the trash can but was not looking in the backyard.

She then told police she had attempted to get a ride from another female but that woman’s vehicle broke down and she wasn’t able to pick Douglas up.

When asked about the male she was with, she said she had talked to a male and was trying to “hang out with him”.

Douglas told police she had nothing illegal on her.

A knife was removed from Douglas’ waistband. In a backpack, officers found a syringe and attempted to detain Douglas. That is when she “violently jerked her hands away from the officers”.

Douglas was taken to the ground where she was “powerfully attempting to place her hands under her body and tried to get up onto her knees”. Officers were then able to get Douglas into handcuffs. While escorting her to a vehicle, Douglas grabbed a street sign post with her legs and had to be pulled off of it.

In Douglas’ belongings officer found two black containers that held numerous syringes and a plastic baggie with fentanyl residue inside. Officers also located a baggie containing meth and a matchbook,  a bottle of mixed pills, and a “Delta 8” baggie with a gummy substance in it that was collected.

Douglas was then transported to the Bedford Police Department for processing and then to the  Lawrence County Jail for housing. The shopping cart was placed in the Bedford Police Department garage and a property release was completed for Douglas to pick up at a later date along with several pills that were found to be over-the-counter medications.