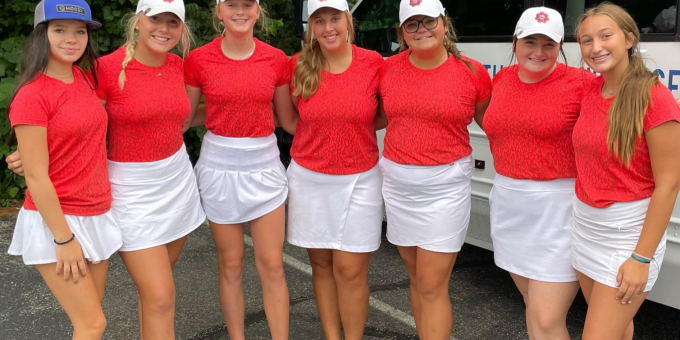 BLOOMINGTON – Bedford North Lawrence opened the 2022 season with a seventh-place finish in the Bloomington South Invitational on Monday at Bloomington Country Club.

McFaddin’s highlights included a birdie on the seventh hole. The rest of the scoring came from freshman Kinleigh Root (88), Ellie Horton (92), Kenley Craig (92) and Nora Howat (103).

“Chloe played pretty well today overall,” said BNL coach Kori Johnston, whose club had to wait out a two-hour rain delay. “She has gained a lot of confidence in her ability to hit good golf shots and doesn’t get easily rattled by bad shots during her round. She finally broke into the 70s over the summer and expects it out of herself every round now – as she should. She put in a lot of work over the summer and I expect her to have a very good season this year.

“I’m very proud of Kinleigh. She was pretty nervous on the first tee but she settled in and put up a good round for her first high school tournament. She had one bad hole but recovered well and kept a good attitude the whole round.”

Carmel’s Claire Swathwood was the medalist with a sensational 8-under 65, a remarkable round on a course that features ultra-quick greens.

“The greens at the country club are always super fast, so putting and approach shots were a struggle today,” Johnston said. “We have a little work to do this week on short game to prepare for Saturday, but we like Country Oaks and I’m expecting some good scores.”

BNL will compete in the Washington Invitational on Saturday.