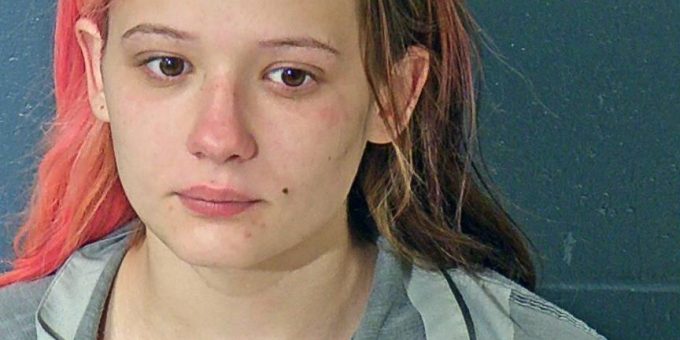 BEDFORD – A Bedford woman was arrested Friday morning after a Bedford Police officer stopped a vehicle for traveling the wrong way on a one-way street.

The officer noticed a green Hyundai hatchback make a west turn on 16th Street at the intersection of 16thand L Street. This block is a clearly marked one-way street for eastbound traffic only.

The driver made a rapid right turn onto M Street despite the officer being behind them. The vehicle came to a stop at 15th  and M streets.

The driver was 19-year-old, Sabrina Leggett. As the officer approached the vehicle Leggett was frantically digging through a drawstring bag in the passenger seat. When the officer told her to remove her hands  she simply stated “it’s not my car.” After Leggett moved to a second bag to locate her license, she was asked to step out of the vehicle.

Leggett explained that she was headed to the Shawnee Apartments to return the vehicle to the owner. She said that she was coming from a friend’s apartment on the square and that she was not from the area and got lost. She told the officer she moved to the Buddha area from Florida and was not familiar with the area.

Leggett gave consent to search the vehicle. Inside police found a paper bindle containing Fentanyl and a cut straw in the bag Leggett was initially digging through. The officer also located several opened and used Narcan packages in the bag and an open Narcan package in the driver’s seat.

She told police she only uses “weed” but that she was actually going to rehab to “detox” using “detox drinks.” She eventually admitted that she used heroin two days prior.