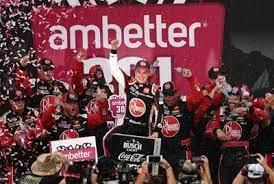 LOUDON, NH. – Christopher Bell had entered Sunday’s race at New Hampshire with the final spot on the playoff grid via points and fighting to keep it.

After taking the lead from Chase Elliott with 42 laps to go, Bell drove away over the final green flag run to win the Ambetter 301 at New Hampshire Motor Speedway, scoring his first win of 2022 and the second win of his career. Bell’s only other win was the second race of the 2021 season at the Daytona International Speedway Road Course.

Bell now becomes the 14th different driver to win a race in the first 20 races of the season, leaving now just two spots available in the NASCAR Playoffs on points.

There were nine caution periods for a total of 52 laps. Only 13 of the 36 drivers in the Ambetter 301 finished on the lead lap.

Elliott remains the championship leader after New Hampshire with a 67-point advantage over second-place Ross Chastain.

Harvick earned his fifth top-five and 11th top-10 of the season.

This was Harvick’s fifth straight top-10 at New Hampshire.

Since joining SHR in 2014, Harvick has only finished outside the top 10 in New Hampshire three times.

“We put two tires on there, which we all thought was the right thing to do, and it just would not get going. We were sliding up the racetrack and it took seven or eight laps to get the car underneath you and then about 20 laps to get the pace back. Then at the end, everybody was just out of tires. I’m proud of everybody on our GEARWRENCH Ford Mustang. We’ll keep plugging away,” said Kevin Harvick, driver of the No. 4 GEARWRENCH Ford Mustang

Briscoe earned his 10th top-15 of the season and it was his first top-15 in two career NASCAR Cup Series starts at New Hampshire.

“That first run we were really good and able to drive up into the top-15. Then from there we just kind of struggled and the track was changing so much. I probably didn’t do the greatest job guiding them where we needed to go. Then we had that spin and tried to play strategy to get up there and we caught the caution wrong. I feel like if we had the long run and were running fourth or fifth versus catching the caution, we probably would’ve been alright. It just didn’t work out. I feel like we had a better car than 15th, but with everything we fought, I guess it was alright. We’ll just have to move on to Pocono,”  said Chase Briscoe, driver of the No. 14 Mahindra Tractors Ford Mustang

This was Briscoe’s third straight result of 16th or better. He finished 14th at Road America and 16th last Sunday at Atlanta.

Briscoe led once for six laps – his first laps led at New Hampshire.

“We were having a good day and we were slowly getting our Smithfield Ford faster. During a pit stop in stage two, I lost second gear on pit road and couldn’t get it into fourth gear. All I had was third, so the guys worked hard to get us back out there and ride around. We were able to get it back into fifth (gear), so we just rode around out there about 20 laps down. It’s unfortunate. We know we had speed here and we really needed a good day to keep us in a good point standing. We know we’ll need a win to make it to the playoffs. We’ve got six more opportunities to make that happen,” said Aric Almirola, driver of the No. 10 Smithfield Ford Mustang

The next event on the NASCAR Cup Series schedule is the M&M’s Fan Appreciation 400 on Sunday, July 24 at Pocono (Pa.) Raceway. The race begins at 3 p.m. EDT with live coverage provided by USA and SiriusXM NASCAR Radio.