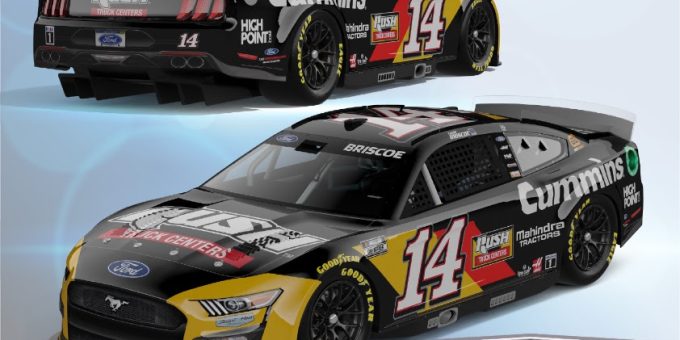 ATLANTA – Chase Briscoe, driver of the No. 14 Rush Truck Centers/Cummins Ford Mustang for Stewart-Haas Racing (SHR), is fresh off his ninth top-15 finish of the season after earning a 14th-place result last weekend at Road America in Elkhart Lake, Wisconsin. Briscoe started in the second position, narrowly missing out on his second pole of the season, and won the first stage of the 62-lap race.

This week he heads to the Atlanta 400 at Atlanta Motor Speedway. Race time is 3 p.m. on Sunday, July 10th.

Briscoe is 16th in the driver standings with eight races remaining in the regular season. He currently holds a spot in the 16-driver playoff field by virtue of his March 13 win at Phoenix Raceway.

The Atlanta track has a new layout since Briscoe was last there. Is he prepared?

“I’m not sure. You might not be able to go back in your notebook as far as you’d like because it’s more of a superspeedway race now and there’s not a ton you can do from a car standpoint,” added Brisco. “Atlanta is one of the harder races now because it’s like a superspeedway race with a little bit of balance focus when it comes to setup. I feel like everyone is still kind of even now, but just having experience there will be big on the mental side. Mentally, that was the hardest race I’ve ever run. This race is 100 miles shorter and should be better. But it’s still going to be way more intense than most of these other races we run. It’ll be interesting to see how that race plays out. We’re coming toward the end of the regular season. There’s an opportunity for a lot of guys to get their first win of the year there and Daytona, or for someone else to add another one and better secure their spot. So we’re all going to be up on the wheel and hopefully, we can have a good day and help our position in playoffs.”

When the Cup Series visited Atlanta Motor Speedway earlier this year, the track had undergone an offseason reconfiguration to create tighter, superspeedway-type racing on its 1.54-mile oval. The racing surface was narrowed from 55 feet to 40 feet and the banking was increased to 28 degrees – the most of any intermediate track on the schedule.

The new reconfiguration will come with challenges.

“Just the runs and how they come together. You go to Daytona or Talladega and it’s two and a half miles and it looks like things just happen so fast, but the runs develop slower on the bigger track,” said Briscoe. “At Atlanta, you take a mile out of the racetrack and things really do happen that much faster. The momentum, the runs – your spotter can only talk so fast to let you know what’s coming.”

Briscoe started the race from the pole after qualifying was canceled due to inclement weather, and he led five of the first six laps, his first laps led at Atlanta. He went on to finish 15th, tying his career-best Atlanta finish in his third start there.

Outside of the Cup Series, Briscoe also has three NASCAR Xfinity Series starts at Atlanta with the best finish of ninth in 2020, and a NASCAR Camping World Truck Series start there in 2017.

All of the SHR cars travel from race to race in haulers from Rush Truck Centers, the premier service solutions provider to the commercial vehicle industry. And those haulers are supported by the RushCare team of parts and service experts, who also provide concierge-level service and maintenance, technical support, schedule mobile service, dispatch roadside assistance, help locate the nearest dealer and more. Rush Truck Centers is the largest network of commercial vehicle dealerships in the United States with 139 locations, and takes pride in its integrated approach to customer needs – from vehicle sales to aftermarket parts, service, and body shop operations, plus financing, insurance, leasing, and rental, as well as alternate fuel systems and other vehicle technologies.

Rush Truck Centers is also a leader in all-makes parts for the commercial vehicle industry and has released its third All-Makes Parts Catalog. The catalog features 16,000 parts from more than 125 manufacturers, the most common parts needed for commercial vehicles. No matter what brand of truck you drive, you’ll find what you need in this catalog. It also is filled with product and technical tips to help keep you up and running.  Contact a local Rush Truck Centers location to pick up a copy today.

Indiana-based Cummins, from car owner Tony Stewart’s hometown of Columbus, is also along for the ride to Atlanta. Cummins is a corporation of complementary business segments that design, manufacture, distribute and service a broad portfolio of power solutions. It is best known for its diesel truck engines. Since its founding in 1919, Cummins now employs approximately 61,600 people and serves customers in about 190 countries and territories through a network of some 8,000 wholly-owned and independent dealer and distributor locations.