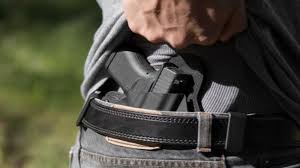 INDIANA – Many new laws signed by Governor Eric Holcomb will go into effect on July 1.

Here are some of the more notable Indiana law changes to watch for starting in July.

Indiana House Bill 1296, which was signed by Gov. Eric Holcomb in March will allow most people over the age of 18 to carry a handgun in public without a permit.

But that doesn’t mean you can just walk into a gun store and buy a handgun without a federally required background check before obtaining a gun.  Gun buyers must still fill out an ATF form and be screened against a national database at the time of purchase.

Gov. Holcomb noted exceptions to the new bill, saying people over the age of 18 are not automatically allowed to carry a handgun they must be considered a “proper person,” as defined by Indiana Code 2021. The exceptions include convicted felons and people with restraining orders or dangerous mental illness.

The Governor added the “proper person” list will be even more stringent come July 1.

Vaping products are about to get more expensive due to a new tax that goes into effect in July. The tax on prefilled e-cigarette cartridges, or vape pods, will be 15% of the wholesale price. A 15% retail tax will be implemented for other vaping products.

July. House Bill 1300 prevents bail organizations from bailing out people accused of violent crimes and requires them to register with the Indiana Department of Insurance. The commercial bond industry is still free to bail out whoever it wants. Lawmakers pushing for the bill said it stemmed from a desire to reduce violent crime.

Lawmakers unanimously voted to pass language aimed at closing a rape loophole about the definition of consent.

Under House Bill 1079, a person who has sexual intercourse with someone who attempts to “physically, verbally, or by other visible conduct refuse the person’s acts” commits rape.

Indiana law currently states that intercourse is only considered rape if it’s done by force or if it occurs with someone who is mentally incapacitated or unaware that it’s happening. That means it’s not always clear to jurors with no law experience if someone pulling up their clothes or saying “stop” falls under any of those categories.