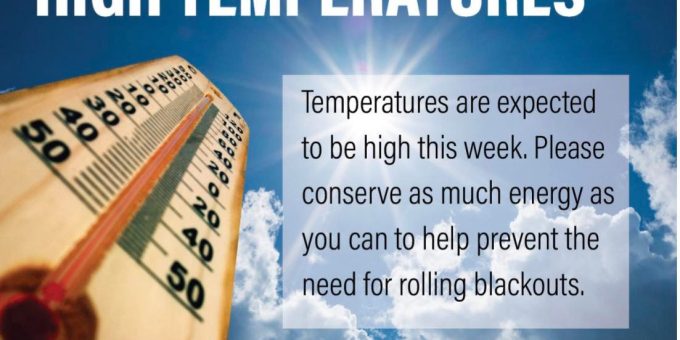 BROWNSTOWN – Jackson County REMC was made aware that there is a possibility of rolling blackouts in Southern Indiana this summer.

According to their Facebook post, this warning was made by the Midcontinent Independent System Operator (“MISO”), an independent, non-profit organization that operates the electrical grid in the middle part of the United States from Canada to the Gulf of Mexico.

They warned that during peak usage we may have a shortage of electricity.

Starting today, June 13th there are extremely high temperatures forecasted. This means that energy usage could be above normal and potentially cause an electricity shortage. If the shortage reaches a critical stage, the grid system could collapse which is what the rolling blackouts are designed to prevent.

“As your electric cooperative, we will do everything in our power to prevent the collapse. If we are called upon by MISO to reduce our load on the grid, we will ask for voluntary reductions first. Consider cutting back on your energy usage during peak times (typically 2-8 p.m., Monday through Friday) by setting your air conditioner thermostats up a couple of degrees and putting off running dishwashers, clothes dryers, pool pumps, and other non-essential electric devices during this period. If this does not reach the needed reduction, we will begin rolling blackouts,” REMC stated in the post.

A rolling blackout typically lasts 15-30 minutes per location before its “rolls” to the next area.

REMC does have a plan in place that systems engineers will manage to reduce the demand on the grid.

If you have a medical condition that requires electricity, make sure you have a backup plan in the event of a large-scale blackout event.