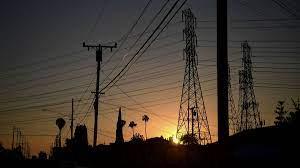 A report from the North American Electric Reliability Corporation shows the power grid faces a risk of disruption from a combination of drought, heat, potential cyber-attacks, geopolitical conflicts, and supply chain problems.

The report found that the Midcontinent Independent System Operator (MISO) faces a capacity shortfall in the North and Central areas. This includes Indiana. This shortfall results in a high risk of energy emergencies during peak summer conditions.

The Associated Press reports usually utilities will black out certain blocks or zones before cutting off power to another area, then another. Often areas with hospitals, fire stations, water-treatment plants, and other key facilities are spared.

Eric Holcomb said the state is “monitoring” the possibility of rolling blackouts.

“We hope that’s the worst-case scenario obviously,” he said.

Holcomb said he believes the report underscores the need for more energy sources.

“We’re one of the fastest-growing renewable, clean-energy source states, number four right now in America,” Holcomb said. “So yes, we’re actively recruiting not just our all of the above approach in renewables, but some new sources as well.”

The company projects the need for increased, non-firm imports and potentially emergency resources to meet the 2022 summer peak demand. They report warmer-than-normal temperatures among the reasons for the increased demand.