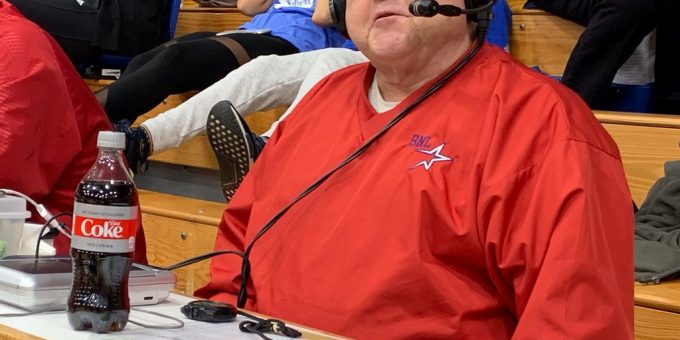 BEDFORD – Myron Rainey will forever be known as the “Voice of the Stars.” Rainey, a veteran broadcaster with WBIW for 40 years, died on Tuesday.

Following the end of his remarkable career broadcasting Bedford North Lawrence athletics, Rainey was enshrined in the Indiana Sportwriters and Sportscasters Hall of Fame. Rainey was the soundtrack for some of the biggest moments in BNL sports history, including five state championships in basketball. He chronicled the careers of Damon Bailey, Danny Bush, Pete Pritchett and other members of the Indiana Basketball Hall of Fame along the way. He also called BNL football games from 1979 until the conclusion of the 2013 season.

Radio was not Rainey’s primary career (he served as an elected Lawrence County official as the recorder and clerk), but it was his passion. He fell in love with the idea of broadcasting while watching Indiana legend Dick Enberg and former BNL star Bob Pettit announce the “Game of the Century” between UCLA and Houston in the Astrodome in the 1968.

What a journey it was for the 1970 Shawswick graduate. He called the 1983 girls state championship, the unforgettable ‘90 boys title with Bailey’s heroics in the final game, the four-overtime thriller with Jeffersonville in the 1999 sectional at Seymour, countless other games. They become a blur after so many years, but the memories and relationships remained.

He knew the exact number to almost every destination (plus all the best places to eat along the way) on the BNL schedule.

Rainey was known for his critiquing style when it comes to calling the action and letting the audience know how the game officials are doing. He retired from the public airwaves with his own personal booth above the northeast corner of BNL Fieldhouse, and he’ll be forever enshrined in the Hall.