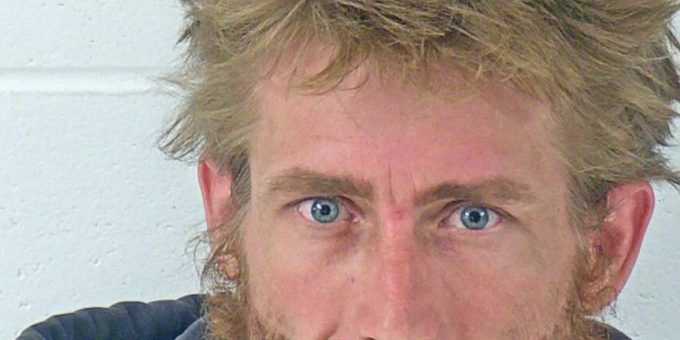 BEDFORD – A Bloomfield man was arrested on Thursday, May 26th after he was stopped by police and Oolitic Town Marshal Harrington and were alerted by canine Deny Joe that drugs were in the vehicle.

According to a probable cause affidavit, Marshal Harrington and Bedford Police Captain Chase Hamilton were on duty and were patrolling in and around Bedford.

While Captain Hamilton and Marshall Harrington were parked in the area of the Salt Creek bridge monitoring both the north and southbound traffic on State Road 37 they observed a silver full-size pickup truck traveling north, and they both noticed that its license plate lights were out.

They stopped the driver of the Chevrolet Silverado at 11:50 p.m., on State Road 37, south of John Williams Boulevard, in front of Storage Express. Driving the truck was 33-year-old Kevin Jones.

Officers identified themselves and told Jones the truck’s license plate lights were out.

Officers noticed Jones’ pupils were dilated. He provided officers with his license, registration, and proof of insurance. Marshall Hamilton asked him “if there was anything in the vehicle that I should be aware of? ” He then informed Marshal that he had a 10 millimeter on his side.

He was then asked if there were any drugs in the truck and Jones stated, “It’s the boss’s truck buddy I couldn’t tell you.”

Jones was asked to step out of the truck and his gun was taken from him. The gun had a hollow point round in the chamber and the magazine contained eight additional bullets.

Canine Deny Joe was deployed and alerted officers to drugs in the truck on the driver’s side door, the passenger doors and on a toolbox located in the bed of the truck.

In Jones’ wallet, the officer found a corner baggie of  0.830 grams of crystal meth.

Jones was then placed in handcuffs and detained.

In the truck officers located a loaded revolver, ammunition, a metal vape pen containing THC, and a glass smoking pipe.

The owner of the truck arrived at the scene and took possession of the vehicle.