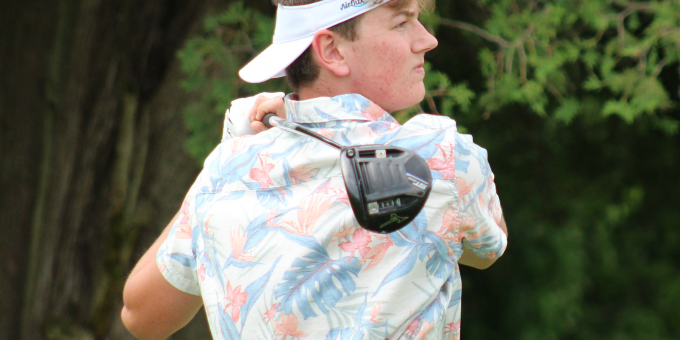 BEDFORD – They didn’t plan this identical exit, to shoot the same score and say the same things as they made their farewell tours of Otis Park. Coincidence? Bedford North Lawrence’s senior trio, dressed for a frat party rather than a serious occasion, were certainly serendipitous while celebrating a last walk on familiar ground.

For Trevin Hutchinson, Dylan Endris and Ryan Cobb, the final round on the home course was not about score. Too many emotions and distractions got in the way. Cloudy brains and good golf don’t coexist. So the senior Stars let their teammates do the heavy lifting of victory while they enjoyed their moment in the sun – yes, there was sun after all on a Thursday that featured almost the entire gamut of weather possibilities.

BNL celebrated Senior Day with wins over Mitchell, Washington and Salem on the front nine. The Stars posted a team total of 161 to conquer the Lions (199), Senators (219) and Bluejackets (244). Jett Jones earned medalist honors with a splendid even-par 37 that featured two birdies, and Houston Corbin had two birdies while carding 39. Any other day, they would be in the spotlight.

But not this day. This was the moment for the upperclassmen, who continued the tradition of unfashionable golf attire on Senior Day and all fired 43s. Considering all the outside noise, with friends and family walking alongside for the finale, that was happenstance. They were engulfed by memories, overwhelmed by how quickly this stage of life had passed them by, thankful for the life lessons a unforgiving sport imparted.

And what did they all learn? One word was spoken by all three – patience. Golf mimics life in so many respects. Now they realize that.

“A lot of patience, a lot of life skills,” said Cobb, who plans to enroll in lineman school. “You have to play the ball where it lies, and that could be a bad spot or good spot.” Just like life, it is what it is.

“You have to be patient with your game,” Endris said. “That’s how you get better, patience with yourself and practice every day, working your butt off.” Just like life, work ethic is rewarded.

Hutchinson, a state finalist last year who will play college golf at Oakland City, has posted better scores. He was more concerned about the moments, how fleeting it seemed now that it’s nearing the end.

“I didn’t play my best, but that’s OK,” he said. “I didn’t really care how I played, it was the last meet at Otis. It felt crazy. It’s kind of surreal. The last three years have flown by. I never expected that, I never thought it would go that fast.“ If he had asked, his elders could have told him that.

“Time flies,” Endris said. “It went so quick. There are things I wish I had done better, and there’s things I’m glad I did do.”

What’s next? BNL still has work ahead. The Stars will compete in the Providence Invitational at Champions Pointe on Saturday, an important preview round on the regional course. That’s the prelude to the sectional.

“We’ve got some goals ahead of us,” BNL coach Jeff Hein said.

The Stars will play in the IHSAA sectional at Cascades in Bloomington on June 6.