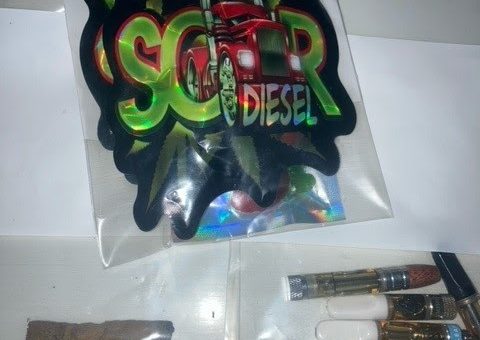 WAYNE CO. – On Tuesday, May 24th at approximately 11:00 p.m., Trooper Luke Tipton of the Indiana State Police Pendleton Post was patrolling in the area of Main Street and Pierce Street in Liberty, Indiana, when he stopped a 2014 Chevrolet Silverado for not having a plate displayed on the rear of the truck.

Trooper Tipton made contact with the operator of the vehicle, who was identified as Verlando Worfolk, 49, of Indianapolis, Indiana.

During the duration of the stop, Trooper Tipton observed criminal indicators and requested the assistance of a canine to perform an open-air sniff of the vehicle.  Officer Todd Dickerson of the Liberty Police Department and his partner K-9 Rogue responded to the scene. Rogue indicated a positive presence of narcotics.  A subsequent search of the vehicle discovered approximately four grams of cocaine, marijuana, and drug paraphernalia.

Worfolk was arrested and transported to the Wayne County jail on preliminary charges of possession of cocaine and possession of marijuana.

Trooper Tipton was also assisted at the scene by Trooper Josh Bayly and Davis Towing.