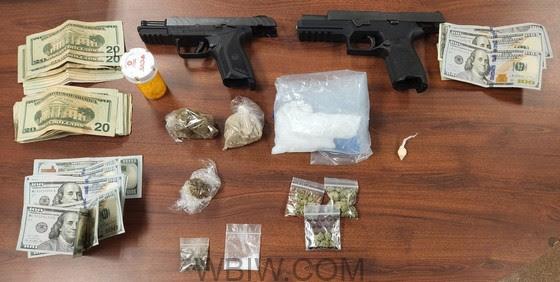 BEDFORD – On Wednesday, May 18th, the Indiana State Police obtained information that Kyle Whitaker, 28 of Bloomington was involved in dealing heroin in and around Lawrence County.

Bloomington District Troopers, along with the ISP Bloomington District ACES and the ISP Drug Enforcement Section, began an investigation that quickly led to the probable cause of the search of Whitaker’s residence on Elwren Road in Monroe County.  An affidavit was submitted to the Honorable Judge Robert Cline of Lawrence Superior Court 2, who signed and issue the search warrant.

At approximately 5 p.m., ISP personnel and Bloomington Police narcotics detectives executed the search warrant.  Upon entering the residence, officers encountered 10 total people who were detained.  The search revealed that Whitaker was in possession of approximately 4 grams of heroin, 8 grams of methamphetamine, and 6 grams of marijuana.  In addition, Whitaker was in possession of several items associated with the dealing of drugs, as well as a loaded 9mm handgun, syringes, and drug paraphernalia.

Jacob Smith, 27, of Carmel, was located at the residence and had been staying there for several days.  Smith was found to be in possession of 110 grams of heroin, 119 grams of methamphetamine, a 9mm handgun, and items associated with dealing drugs.

Both Whitaker and Smith were arrested at the scene.  Whitaker was transported to the Lawrence County Jail, where he was incarcerated for Conspiracy to Deal Heroin Between 1 and 5 Grams with a Firearm (Level 3 Felony).  Smith was incarcerated in the Monroe County Jail for Dealing Heroin Over 10 Grams (Level 2 Felony) and Dealing Methamphetamine Over 28 Grams (Level 2 Felony).

Both Whitaker and Smith are expected to face other charges as well.  In addition, the other occupants at the residence were not arrested at the time, but more arrests are expected.

Indiana State Police ACES Sergeant Greg Day praised the teamwork and swift investigation.  “Once again, the seamless working relationship between ISP, Bloomington PD, and the Lawrence County Prosecutor’s Office has proved successful.  There is no doubt, that the amount of heroin seized during this investigation has saved lives.”

Anyone with information on illegal drug activity is requested and encouraged to call the Indiana State Police Bloomington Post at 812-332-4411, the Lawrence County Prosecutor’s Office tip line at 812-545-4700, or send an email to drugactivity@lawrencecounty.in.gov.  All calls are confidential.