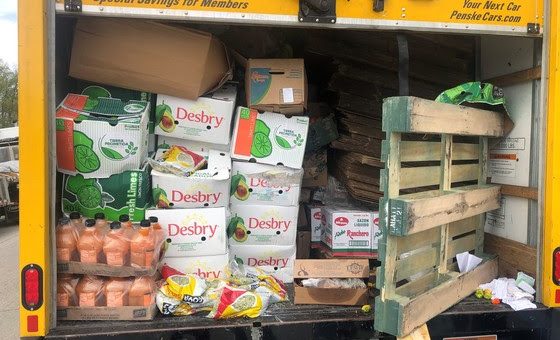 SEYMOUR – On Friday, April 29th, a traffic stop on a box truck made by the Indiana State Police led to the discovery of an overweight load containing unrefrigerated perishable foods and untaxed alcoholic beverages.

The incident began at approximately 2:30 pm when a concerned motorist reported a Penske box truck traveling northbound on I-65 near the 50-mile marker.  The motorist said the truck had a blown tire and was continuing to drive on the tire, throwing debris into the path of other motorists.  The truck was also leaning to one side and the driver was having difficulty keeping the vehicle under control.

Troopers located the truck after the truck bypassed the I-65 Northbound Scales, just north of the Seymour exit.  A traffic stop was conducted on the truck near the 52-mile marker.  During an inspection of the truck, troopers discovered that the truck was heavily loaded with food and beverages traveling from Miami, Florida to an Indianapolis, Indiana market.  The truck was unrefrigerated and contained fruits, vegetables, fish, and alcoholic beverages.

The Jackson County Health Department was contacted to inspect the load due it contained unrefrigerated perishable foods.  Indiana State Police Motor Carrier Inspectors responded to inspect the vehicle.  A check on the vehicle’s weight determined that the vehicle weighed approximately 15,000 pounds more than is allowable by law.  The vehicle was impounded and placed in a secure facility.

The vehicle was offloaded on Saturday, April 30th, and Monday, May 2nd.  The Jackson County Health Department oversaw the destruction of approximately 200 pounds of fish and 400 bags of vegetables that were not properly refrigerated.

The Indiana State Excise Police obtained a search warrant for the vehicle to confiscate untaxed alcoholic beverages located in the truck.  As a result of the search warrant, approximately 400 cases of beer were seized.  The driver of the vehicle, a Florida resident, received citations related to transporting perishable foods in excess of acceptable temperatures and not having a required logbook.  Numerous other motor carrier violations were noted on an inspection report.  The driver was then released with the truck containing the remaining food items he was permitted to possess.

The investigation by the Indiana State Excise Police is ongoing.