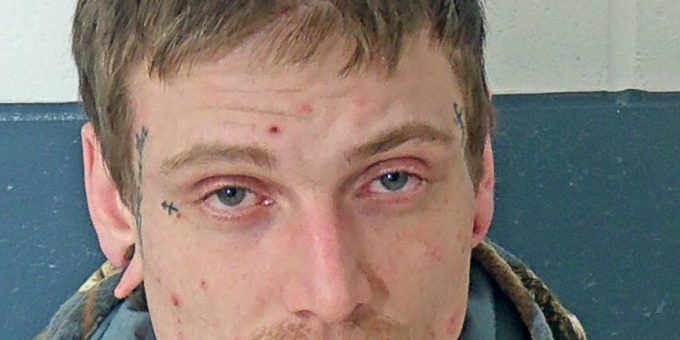 BEDFORD – A French Lick man was arrested Easter morning after a Bedford Police officer observed a male passenger in a red truck “dive” toward the floorboard of the vehicle as it passed in front of a police vehicle northbound on State Road 37 near Dixie Highway.

Near the intersection of State Road 37 and Patrick Robbins Way the officer was able to run the registration plate on the truck returned to a red 1996  Dodge Neon and not the Chevrolet pickup. The officer activated his lights and initiated a traffic stop on State Road 37, north of 16th Street.

After approaching the vehicle he informed the driver Sara Randolph why he stopped her vehicle. She apologized about the false and fictitious registration. Police say her passenger 28-year-old Randall Roberts appeared nervous.

When the officer asked permission to search the vehicle, the request was denied. A canine was requested to the scene.

Randolph was given a written warning for false or fictitious registration.

Canine Zazu alerted officers to possible drugs in the truck.

Under the dash, officersI located a black zippered pouch with a magnet attached to the back. The pouch contained one flexible glass smoking device and a straw which both had crystal meth residue on them. Police also found a metallic smoking device that contained burnt marijuana, a metallic grinder, and rolling papers.