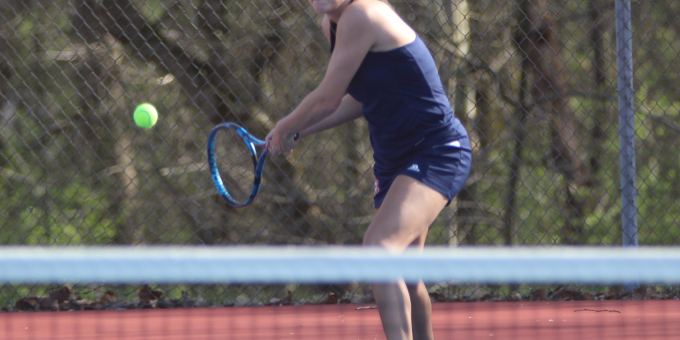 BEDFORD – Bedford North Lawrence swept the doubles and won a marathon singles match to pull out a 3-2 victory over Jennings County during high school tennis action on Tuesday.

The Stars (3-2) juggled their lineup and made the changes work. Izzy Alldredge moved to singles and clipped Mia Silvey, rallying during the final two sets for a 4-6, 6-1, 6-4 triumph at No.3, the deciding point in the team count.

“We knew at the start of the season that we were going to try different lineups, and tonight felt like the right night to try this particular one,” BNL coach Joni Stigall said. “It seems to have been the right decision, thank goodness.

“Last night Kenley (Craig) and Izzy were our lone winners at Loogootee. No one played well there, but they just put out the fight and effort to pull out a hard-fought win. So to pull Izzy from doubles and place her at 3 singles was a tough decision. She started very shaky and played very stiff, so I started wondering if I did the right thing. But in that second set she came alive. I reminded her that the game is the same as doubles – hit the ball over the net and win points. She settled down and played a long back-and-forth match. She was tired but never gave up, and that shows me a lot.”

BNL’s usual No.1 doubles tandem of Bella Stigall and Mallory Pride pounded on Lucy Brown and Maria Alberti for a 6-3, 6-0 victory. Craig formed a new tandem with Ashlyn Wever at No.2, and they won a first-set tiebreaker before rolling over Caitlyn Schuck and Amy Vogel 7-6 (7-4 in the tiebreaker), 6-0.

“They have never played together and with the weather we have had, they have had very little practice together,” Stigall said of the new pairing. “It took that first set to work some things out, but they flew through that second set. I saw some things I really liked and some things we need to fix, but for a spur-of-the-moment change, they handled that very well.

“Bella and Mallory were solid. It’s been a rough week, things were better tonight, but they have to cut back on errors and work on placing the ball better.”

The Panthers won the top two singles spots with Reagan Brown topping Becca Epping 6-1, 6-2 at No.1, while Tatum Brown conquered Rachel Kidd 6-3, 6-0 at No.2.

“Rachel and Becca played well,” Stigall said. “Neither like to lose and were a little down about that. They just have to realize that they both played two great players, both of whom are their coach’s daughters. The Brown girls are tough, very skilled players and I was actually really happy how Rachel and Becca played. Becca is a completely different player than last year. She is mentally tough this year and her play is at a much higher level. It shows how hard she has worked.”

BNL will host New Albany and Martinsville on Saturday.