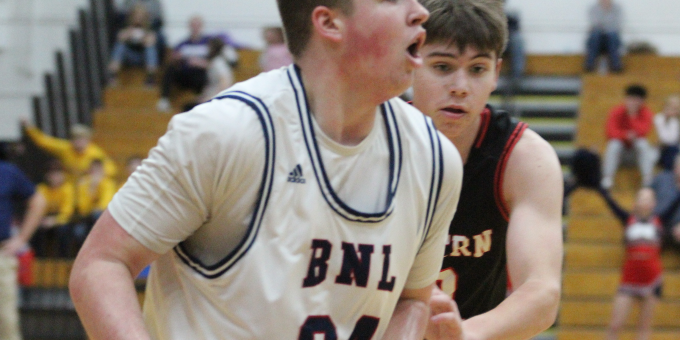 BEDFORD – What doesn’t kill you makes you stronger, a popular phrase attributed to a German philosopher, and the reason Jasper has enjoyed a renaissance season. Suffering through unusual struggles made the Wildcats a lot tougher.

After recording only six wins last season, the program’s first losing campaign in a decade, Jasper is back on track, sporting a sparkling 17-4 record as it prepares to cap the regular season against Bedford North Lawrence on Thursday night. For a team that averaged 16 wins per season the six years before last year’s slippage, this is more like it.

The Wildcats, undefeated at home, have a veteran cast that absorbed the punishment, learning as they lost. The claws are sharp once again.

“We have six seniors who all played last year during a tough season,” Jasper coach John Goebel said. “That experience has made us stronger.”

Even the loss of a top scorer hasn’t yet slowed them down. Junior guard Carter Mundy (13.3 points per game) went out for the season with a torn ACL knee injury earlier this month, but the Wildcats still have plenty of weapons with senior Connor Foley (13.3 points, 8.6 rebounds), senior Tanner Erny (9.0), junior guard Grant Young (7.9 points, 4.1 assists) and senior Gus Heichelbech (7.9, 5.0 boards).

“Jasper is good,” BNL coach Jeff Hein said. “They play well at home. They have very good athletes, two kids inside that are a load. We need to compete against a good team. Win or lose, it’s going to be a good game for us, a chance to play against a good opponent leading into the tournament.”

The Stars (11-10) have shifted to tournament mode, structuring all preparations for the first-round sectional rematch with Jeffersonville. That doesn’t mean they don’t need the momentum of a quality road victory. Last season they went into the postseason with a three-game winning streak, including an overtime triumph over Jasper, and rode that wave all the way to the sectional final.

Right now, BNL has shown signs of the same surge, winning three of the last four and boosting the offensive output in the process. Even with the fourth-quarter blank, with all the starters resting, against Eastern Greene, the Stars have averaged a respectable 61 points per game of late, with Colten Leach (a career-high 36 points against Evansville North) and Colton Staggs (a career-high 25 against Eastern) doing a lot of damage. Leach (averaging 14.8) and Staggs (13.9) will command a lot of attention.

“BNL poses matchup problems with us because they play four or five out offensively,” Goebel said. “Guarding them on the perimeter is an issue – not to mention Jeff Hein teams are always tough and competitive.”

BNL won last year’s clash 59-55 in overtime, with Leach scoring 19 points. Mundy had 15 for the Wildcats, who hit 18 of 25 shots in regulation and still lost.