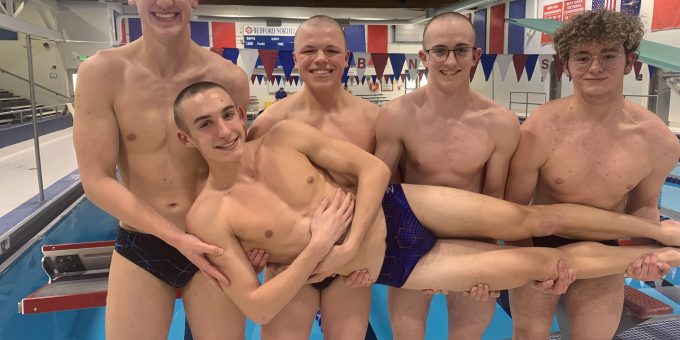 BEDFORD – Trey Kimbley’s grin and voice revealed his bubbling nervousness, with the IHSAA state finals still 48 hours away. When preparing for the first trip to the Olympic-sized pool and stage, an edge is understandable and expected. Perhaps some excitable energy will propel him through the water a little faster.

That’s what Bedford North Lawrence needs from its five-man crew, the qualifiers for the state preliminary races at IUPUI: just an edge, something to power the Stars through the water just a tick faster. In the biggest meet of the season, that makes a difference. As Kimbley stated, “It’s the big leagues up there. I’m used to normal, small-town Indiana swimming.”

If Kimbley needs a boost, he can get it from his teammates, who’ve been there before. When the Stars dive into the pool for their five events, they won’t be making the happy-to-be-here, smile-and-wave appearance before taking pictures and departing. They hope to make a splash.

Cole Baker will compete in two individual events and two relays as BNL looks to earn return trips to the second day of competition. The top eight in each event will qualify for the state championship races on Saturday, while places 9-16 (from the field of 32) will advance to the consolation races.

Baker, who was runner-up in the 50-yard freestyle in the sectional but earned an invitation to the state meet based on his sizzling time, is seeded 10th at 21.37, obviously within range of a second-day swim. The others need to make huge leaps, based on seedings, but have goals of breaking school records.

“There’s too many times in the past where we were happy to just make a guest appearance,” BNL coach Adam Young said. “Those days need to be over. We planned the season to taper for state, to drop time at state. It’s hard. But we have some extra motivation. We try to train these guys for repeated top performances. We want them to be ready to go.”

“It’s not anything out of the normal,” Baker said with a shrug. In other words, it is what it is. “People are very fast. You have to really push it. It’s really hard. I want to make it back to Saturday and get in the A final. Any improvement in time will be a good drop.“

“It will be a challenge for us, but it’s doable,” said Allen, who is making his third trip to the state meet. “We all had good times in the sectional, but there’s always room for improvement. We’re feeling pretty good and we’ll give it the best shot we can. It never gets old. It’s an experience to always cherish. You have to work your butt off to get there.“

“We’ve all been working really hard, especially for the relays,” Swenson said. “The best you can do is put in the work, do things other people aren’t willing to do.”

In the past, BNL would taper for the sectional and hope to hang on in the state meet. That strategy has changed. The Stars believe they have more energy to burn.

“I feel pretty good that we will have an improved performance from the sectional,” Young said. “We’ll see what happens. That added motivation makes a difference. When you have a chance to medal, or get a record, that’s much bigger than being seeded with no chance to make it to Saturday.”

The prelims are scheduled for 6 p.m. The finals and consolations are set for 1 p.m. on Saturday.