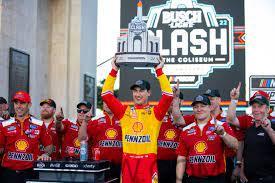 LOS ANGELES – Joey Logano of Team Penske (Ford) was the winner of the Busch Light Clash at the Coliseum in the non-points race of the NASCAR Cup Series on Sunday, Feb. 6 on the Los Angeles Memorial Coliseum (quarter-mile, asphalt oval)

Joey Logano won the Busch Light Clash by .877 of a second-over runner-up Kyle Busch. Fourteen of the 23 drivers in the race finished on the lead lap.

This was the first-ever stock car race to be held inside the Los Angeles Memorial Coliseum.

Cole Custer, driver of the No. 41 HaasTooling.com Ford Mustang qualified sixth to start second in Heat No. 2. He finished fourth in Heat to advance to Feature, where he started 14th. Custer finished seventh in Feature, completing all 150 laps.

“It was one of the coolest events I’ve ever been a part of. To walk down those steps into the Coliseum and see the big names performing… it was a fun track to race around. Hats off to NASCAR. They deserve a great pat on the back for what they’ve done here. I’d love to come back,” Custer said.

“I thought it was a great event. I don’t think you could’ve asked for it to go any better, as far as the event goes. My car was just way too loose all weekend and couldn’t get going,” Harvick added.

Chase Briscoe, driver of the No. 14 Mahindra Tractors Ford Mustang qualified 26th to start seventh in Heat No. 2. He finished second in Heat to advance to Feature, where he started sixth. Briscoe finished 22nd in Feature due to a mechanical issue, completing 53 of 150 laps.

“We had such a fast Mahindra Tractors Ford Mustang and I think we had a shot at starting the season with a win. Yesterday during practice and today in the heat race it just handled so well,” added Briscoe. “Once we got through those first 15 to 20 laps, it had plenty of grip, and then that first caution was when it went downhill. There are always things to work out with new cars and it’s unfortunate that it happened when we were upfront, but the great thing about this race is we get a chance to get on track and figure it all out before we get to Daytona. This is still a great way to start the season. We’ve proven that we can show up and be competitive, and I’m excited to get to the next one in a few weeks.”

Aric Almirola, driver of the No. 10 Farmer John Ford Mustang qualified 21st to start sixth in Heat No. 1. He finished eighth in Heat to start seventh in LCQ. Almirola finished ninth in LCQ due to an accident, completing four of 50 laps. (Only the top-three in LCQ advanced to Feature.)

“It was a bigger hit than I expected with as slow as we were going here. The 38 (Todd Gilliland) just destroyed us. We had a decent start and we were moving forward and the 38 just drove in there a mile and tore us up.”