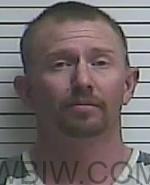 According to a Brown County Sheriff’s Department press release, deputies responded to the park Friday evening after a report of a suspicious-looking man seen with a young girl near the park’s south gate. Police stopped the vehicle for a traffic infraction on Main Road within the park. The driver refused to identify himself and was detained.

“Park security started getting kind of a bad vibe with his actions and whatnot, and they were concerned about the juvenile that was in the vehicle with him,” said Deputy Joshua Stargell. “So they asked for us to check him out.”

Deputies later found that Daniel N. Eggers was wanted in Nevada on a warrant charging him with parental kidnapping of a minor, issued in September of last year when he left with his daughter — later identified as the minor in his car, according to Deputy Stargell.

Eggers is being held on local charges and for extradition to Nevada, according to the sheriff’s department. The girl was turned over to the Department of Child Services.