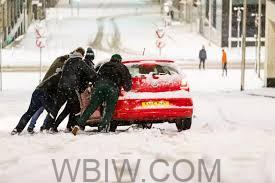 Driving during winter can often be a treacherous task if roads are filled with ice and snow, causing many drivers to break down and possibly be stranded for long stretches of time. The holidays can also be a tricky time to get hold of vehicle assistance companies, especially if the car has broken down in a remote area with no phone signal.

Gunther Volkswagen of Coconut Creek surveyed 3,000drivers across the country, asking if they would stop and help a fellow driver who had been stranded in a snowstorm with a broken-down vehicle. Surprisingly high, almost a quarter of drivers in Indiana (23%) admit they would NOT stop to help. Reassuringly, however, it seems that on the whole Indiana is a state of ‘Snowstorm Samaritans’ whereby the majority (77%), would come to a fellow driver’s aid. In fact, drivers in this state are among the most likely in America to help out.

When these figures were analyzed by state, perhaps unsurprisingly (given they are among the coldest and least populated states) those in Idaho and Wyoming seemed to have the biggest hearts when it comes to helping out other road users, with 91% of people in these saying they’d stop to assist a driver stranded in bad weather.

Comparatively, this figure was just 42% in Nevada – in other words, most here would not stop to help.

It was also discovered that more than 3 in 4 respondents said they’d go the extra mile (pardon the pun) and give a stranded driver a lift to a place of safety if their car had broken down. The survey also found that 55% said they are more likely to help a stranded woman driver who has broken down, as compared to if they were a man.

Lastly, it was found that 67% of drivers said if their car broke down in a heavy snowstorm, they’d rather walk 5 miles into town than accept a lift from a stranger. It seems some are more afraid of their safety in the hands of other people, as compared to harsh weather conditions… However, it’s important to note that in an emergency, your vehicle provides you and passengers with temporary shelter and also makes it easier for rescuers to locate you. It’s possible to lose sight of your car in poor visibility or snowy skies, therefore, increases your risk of getting lost if you walk around.

If the weather proves too dangerous for driving, it’s always a good idea to stay home if you’re concerned about your safety. However, if you must make a long drive or cross-state road trip while the roads are slick and snow-covered, it’s in your best interest to maintain a slower speed overall and increase your following distance for safety reasons.

For example, if you encounter a car in front of you that suddenly brakes on an icy road, it’s better to drive at a slower pace in case you need to brake quickly too. Additionally, it’s a good idea to have an emergency supply bag on hand in case you may need it, on top of your usual breakdown kit. Some supplies that could come in handy are: