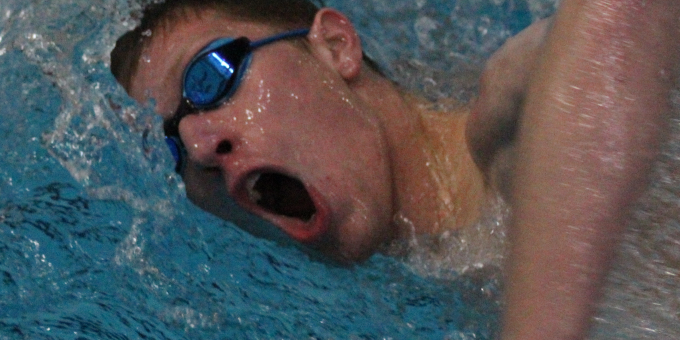 BEDFORD – Alexander Swenson almost – and almost is the key – gave up his senior season in the pool. Sounds a little ironic for a swimmer, who spends the bulk of his life in the water, to cite burn out as a reason to give up his final campaign. Yet the water had doused his inner flame. Look what he would have missed.

Rekindled by his teammates, Swenson was one of four seniors honored during their Senior Night performance in BNL Pool, and they made a big splash as the Stars raced past Columbus East for a 95-88 victory on Thursday night. In the girls meet, the Olympians dunked BNL 138-39.

BNL’s senior foursome will eventually part on different paths – college, or the military – when the 2022 campaign comes to a close. But this curtain call was a chance for Swenson, John Allen, Garrett Henson and Noah Carter to combine for memories and triumph. Swenson and Allen both won twice and helped the Stars win two relays. What a way to go.

“Honestly, I would have never expected any of this,” Swenson said. “Just the memories are the main thing for me. I almost didn’t swim this year, I was so burnt out of it. What kept me was the teammates. They are amazing. These will be memories in my head forever.”

For Allen, who’s now an international star with his sister Jenna watching the live stream of the meet from Europe, winning was a great way to punctuate his home career.

“We were all so hyped up,” he said. “Coming out here and gives it all we had in the pool, coming out on top is a great feeling. It’s just an awesome experience. These four years have been the best of my life. Reaching the end is the best feeling in the world. I’m so glad my family supports what I do. And I’m excited for the future. I couldn’t be happier.”

BNL’s other win came from Kade Bailey in diving with 139.85 points, but this was all about the upperclassmen. The spotlight glowed as they were introduced with their families. They’ve gone through some difficult periods – including two seasons of the virus shadow over everything – and made the journey worthwhile.

“It’s a mixed feeling,” Henson said. “It’s something I’ve done for eight years. I love it. And I hate it. But it‘s something I will cherish for the rest of my life. I’m glad to have done it with all these guys.”

The love-hate relationship is real during this part of the training season. Muscles ache, and early-morning workouts are grueling. “The meets,” said Carter, who now wishes he had devoted more than two years to the sport, “are the best part.”

“Seeing everyone drop time, even when we’re really tired, just baffles me,” Swenson said. “We’re getting to the point to be super ready for the sectional.”