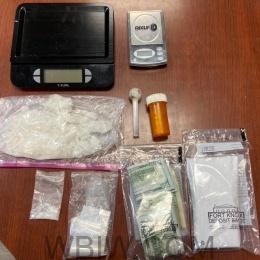 WASHINGTON – Three people were arrested on drug charges Monday in Washington, Indiana after police seized more than 181 grams of meth.

During a search of the residence, officers seized approximately 181.5 grams of crystal meth. Police say the street value of the drug was approximately $18,000.

Police also found items associated with the distribution of drugs, pills, and more than $5,000 in cash.

Gallardo faces charges of dealing in meth, maintaining a common nuisance, and possession of drug paraphernalia.

West is facing a charge of visiting a common nuisance.

Dunagan faces charges of maintaining a common nuisance, and possession of drug paraphernalia.

All three are being held at the Daviess County Security Center.