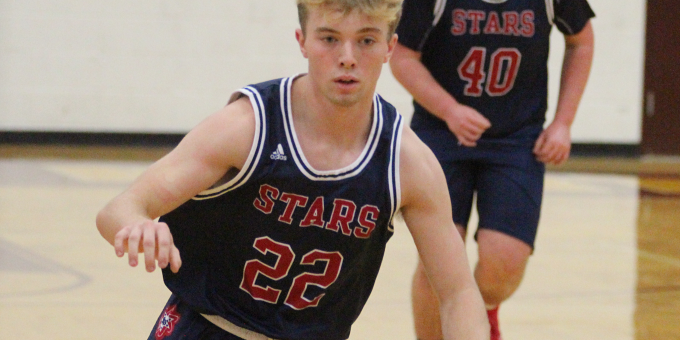 BEDFORD – Overlooking a coaching aspect of the man who holds the state record for victories is difficult. J.R. Holmes hasn’t won 863 games in 52 seasons by accident. He knows what he’s doing.

So what defines a Holmes team? What’s the first thing that comes to mind? Bet it wasn’t defense. It probably should be. For Bedford North Lawrence, which has suffered through fits of frustration against Bloomington South for almost two decades, finding cracks in South’s wall of protection has been an exercise in futility.

BNL coach Jeff Hein, himself a defensive connoisseur, spent time dissecting game film while preparing for Friday night’s home opener with the Panthers. He watched carefully, looking for defensive mistakes or lapses in the recent South win over New Albany. Know how many he pinpointed? “One mistake in 32 minutes,” he admitted. And he had to appreciate that excellence.

“I’m not sure we’ll play another team that can defend like them all year long,” Hein said. “They do such a good job, being in the right spots and closing out on shooters, doing all the little things. J.R. probably puts more emphasis on defense than what we do, and that’s hard to imagine. They don’t make mistakes. They just do a great job and always have. They’re done that for a long time.”

So Norman Dale was correct when he told members of his Hoosiers squad ”I’ve seen you guys can shoot but there’s more to the game than shooting. There’s fundamentals and defense.” That last word again, Coach Dale? “Defense.” He spoke for anyone who wants to compete on a high level.

South, 2-0 and ranked No.10 in the Class 4A poll, is allowing only 39.5 points per game in its first two wins, and the Stars know those struggles. BNL has scored a mere 30 points in each of the last two meetings, has cracked 42 only once in the last six, and has managed 52 or more only three times during South’s current 17-game winning streak in the series.

Holmes was guilty of a little poor-mouthing when discussing the stinginess. But there’s no question that will be South’s strength, even if that part of South’s success has been underrated in the past.

“I don’t know if it‘s defense or if the other team has just shot poorly the first couple of games,” he said. “We’d like to think our defense has had something to do with it. We have to play some defense because we’re not a great offensive team.”

South has been good enough, with 6-8 junior Gavin Wisley averaging 12.0 points and 5.5 rebounds, with perimeter threats Noah Ransom (8.0) and Coleman Oliphant (9.5), with senior point guard Patrick Joyce (6.0 assists) directing the attack. Wisley has made 75 percent of his shots – granted, most from close range in the paint – and made his last 8 against the Bulldogs.

“Wisley is a tough match,” Hein said. “He has nice post moves, he can do a lot of things in there, and we’ll have smaller kids on him. So that’s obviously a concern. Oliphant and Ransom can shoot it, and Joyce makes them go. It will be a tough challenge.”

Wisley missed almost all of last season, suffering a broken leg during the 2020 offseason and then injuring his back after playing only a couple of junior varsity games. His emergence, plus the addition of Greenwood transfer Brock Kincaid and Bloomington North transfer Tyree Rochell to solidify the lineup and add depth, has been a key.

“He’s really been our biggest surprise player, one of our better players because he can do some things in the post,” Holmes said.

BNL will have to counter with tempo control, patience and ball security. The Stars were able to do that for a long period in the opener at Bloomington North before finally faltering late during a 66-47 loss. Colton Staggs had 21 points and Kaedyn Bennett totaled 14. They will get the most attention.

”They spread you out and let Staggs do his thing, dribble and either score himself or create spot shots for (Trace) Rynders and Bennett,” Holmes said. “They play hard. They’re not big, so it’s a tribute to them that they played North to the middle of the fourth quarter. They’re well schooled in what they do and what they have to do. You have to be able to keep them out of the paint.”

Freshman forward Vince Moutardier, who saw extended action in the two preseason scrimmages and played the final two minutes in the debut at North, has left the BNL program.