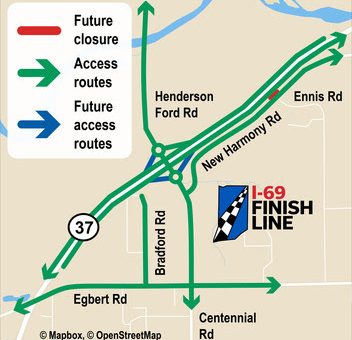 MORGAN CO. – Drivers should watch for changing traffic patterns on or after Thursday, Dec. 2 near State Road 37 and Henderson Ford Road.

Northbound S.R. 37 traffic will shift back across the center median onto the new pavement, restoring divided traffic past the Egbert Road overpass. S.R. 37 remains two lanes – one in each direction – with a reduced speed limit for local traffic between S.R. 144 and the S.R. 37 closure in Martinsville.

With the traffic shift, the new Henderson Ford Road interchange will open and S.R. 37 access to Ennis Road will close permanently. The temporary S.R. 37 signal at Ennis Road will be removed.

The three new entrance and exit ramps opening to traffic are:

Drivers should watch for Henderson Ford Road on-ramp traffic merging into S.R. 37, which is one lane in each direction.

Henderson Ford Road traffic should expect to yield to roundabout traffic using the new entrance and exit ramps. Roundabouts are planned at six of the eight I-69 Finish Line interchanges and include concrete aprons to accommodate large trucks.

To learn more about how roundabouts improve safety and traffic flow for the I-69 Finish Line project, watch the below video.

East of S.R. 37, a new frontage road is expected to open on or after Wednesday, Dec. 1 north of County Road 144. It will connect with the section already open between Travis Road and Stones Crossing Road.

Another new road is expected to open west of S.R. 37 on or after Wednesday, Dec. 1 connecting Wicker Road to Glenns Valley Lane. Shortly after the connector road opens, the S.R. 37 intersection at Glenns Valley Lane will close permanently.