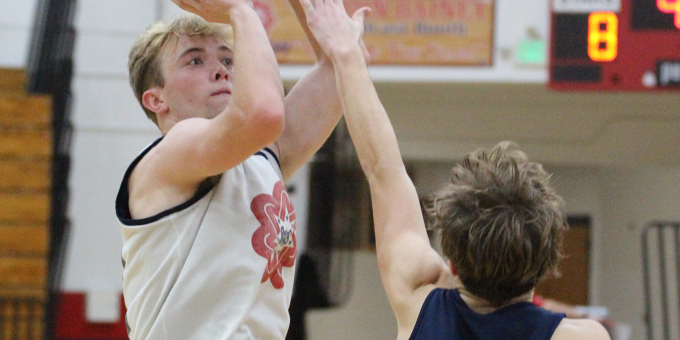 BEDFORD – Somebody asked Bedford North Lawrence coach Jeff Hein about his starting lineup, which is a legitimate question as the approaching season opener looms large in the windshield, and his answer was a mixture of honesty and mystery. “I don’t know who it’s going to be. It could be any of 10 kids right now.”

For the record, there are 252 possible combinations of five from a pool of 10, and the Stars might use that many lineups and rotations. There are probably that many opinions about the best five among those who watched the public debut during the annual intrasquad scrimmage on Monday night. Of course, only one point of view matters, and Hein was busy grading and evaluating what he saw during the four quarters of varsity action.

And there was a lot to assimilate. Fortunately there is still time to make decisions, with another scrimmage coming on Friday night, before that 2021-22 opener at Bloomington North.

One of the few known facts right now: there are 20 names on the varsity and junior varsity rosters. Another fact: BNL has only one senior among those 20, which makes Hein’s third team one of the youngest ever. And one of the shortest, with only one player listed above 6-foot-3.

While the Stars were not at full strength, with junior Colten Leach still recovering from summer knee surgery, with junior Houston Corbin out icing a banged knee, they showed some strengths during the typical scrimmage that resembles a family squabble. Everybody knows everyone, there are no surprises.

Colton Staggs, one of the late-season heroes from last year, will be in attack mode as he scored 18 points. Kaedyn Bennett, another one of the few with varsity experience, still has that outside stroke as he scored 16. BNL hit 16 treys during the four quarters, with sophomore sniper Trace Rynders making big waves by splashing down five, including a couple of ultra-arced that brushed the banners hanging from the rafters.

The Stars will be guard heavy, with quickness and tenacity, with the ability to go deep on the bench and pressure the ball defensively. And they’ll have to, because there’s no big man in the post to menace the paint. If only . . . but since nobody is going to discover a Wonderland cake labeled “Eat me” and grow to new heights, BNL will have to compete with the available talent.

“We played hard, I saw some shots go in the basket,” he said. “Those are two good things. For a week into it, we’re about where we thought we would be.”

The first varsity quarter was played against the junior varsity, and the White smacked the Blue squad 19-8. The first three baskets were bonus bombs, setting the tone. Rynders swished two, Staggs dashed to a 3-point play, and Dylan NIkirk made a bomb at the buzzer. Nice start.

The varsity continued to dominate the second quarter, with Staggs darting inside for a bucket then stepping outside for a trey while leaving his defender searching for a shoe. Freshman forward Vince Moutardier converted a rebound, Bennett scored from the paint, and Dylan Endris (the lone senior) muscled in a basket for a 19-10 difference.

The final two quarters were divided evenly. The Blue won the first 16-8 as Rynders showed off his two rain-making shots from distance. The White won the second 13-9 by scoring the final 8 points, with Staggs and Madadox Ray working inside for 3-point plays.

Hein wasn’t too worried about the scoring. His top demand is defense, and BNL will have to be doubly dedicated to that concept to make up for the vertical disadvantages.

“We’ll have to stay consistent on the defensive end to be successful,” Hein said. “We’ll have to get down and guard people. It’d be nice to have a big tree behind us to block shots, and we could get out and pressure people. We don’t have that.

“That’s the way we will be. We lack a big guy in the middle, so we’ll have to find a way to compete without that. We’ll have to do it as a group. Boards will be an issue. We’ll have to rebound by committee. I like the way they compete.”

Leach’s absence could be a blessing. Having a returning All-Hoosier Hills Conference performer would be a plus, but BNL could age quickly while learning to win without him.

“He won’t be back for a little bit,” Hein said. “But you know what? We’ll continue to get better between now and the time he gets back. It should benefit us in the long run. That’s what we’re trying to do, gradually get better game by game, day by day.”

The next day will be Friday when the Stars visit Martinsville for the IHSAA sanctioned scirmmage. That workout will be another key in deciding who steps to the forefront and earns a starting spot. Although with this team, it might be more important to determine who finishes rather than who starts.

“We’ll play somebody that doesn’t know what we’re trying to do,” Hein said of the next scrimmage. “That will be beneficial. It’s nice to see somebody different. They’ll be tired, by Friday, of beating up each other for the last couple of weeks. They’ll be anxious to see another face to play against.”

BNL will open the regular season at Bloomington North on Nov. 23.