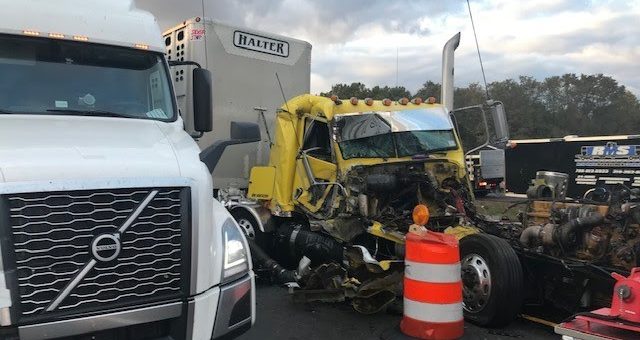 At approximately 4:26 p.m. on November 2, 2021, Indiana State Police dispatch received calls of a crash involving multiple vehicles, in a construction zone on the Indiana Toll Road, near mile marker 100.  This is approximately one mile west of the Bristol Exit.

Preliminary investigation by Trooper Garrett Tharp indicates that traffic was slowed, or stopped, in the construction zone due to traffic congestion. A yellow 2006 Peterbilt towing a livestock trailer loaded with cattle failed to slow down and crashed into the back of a white 2020 Dodge Ram towing an open trailer and a white 2021 Volvo traveling in front of the Dodge.  The collision with the Dodge caused a white 2021 Range Rover to break free from the trailer and land in the roadway.  The driver of the Dodge, Baiysh Dolonbaev, 22 of Chicago, IL, had to be extricated and then was flown by helicopter to Memorial Hospital in South Bend, IN with serious, but non-life-threatening injuries.

The collision between the Peterbilt and the Volvo caused the Volvo to be pushed into the back of a trailer being towed by a semi in front of the Volvo.  The driver of the Peterbilt, Chandler Steffensmeier-Harris 24, Morgan, MN, was taken by ambulance to Elkhart General Hospital with complaints of pain.

None of the other drivers involved suffered any injuries.

Eastbound traffic was diverted off the Toll Road at Exit 96 while the lanes were closed for crash investigation, removal of vehicles, and cleanup of a large diesel spill.  Eastbound traffic resumed at approximately 7:41 p.m.